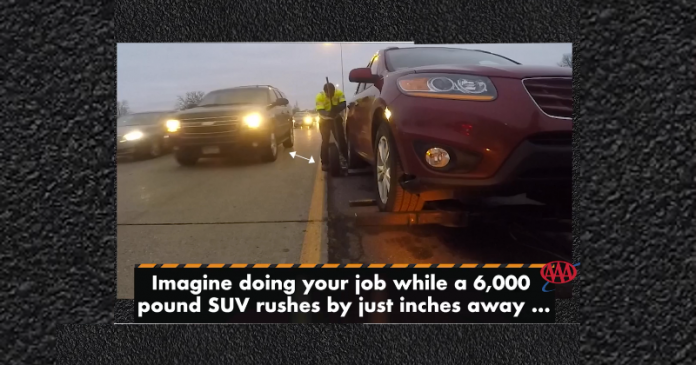 AAA has long been an advocate for “Move Over” laws, requiring drivers to “slow down and move over” for emergency responders on the roadside. Yet hundreds of people are still killed on the roadside every year, including an average of one tow truck driver every other week. That’s why AAA-The Auto Club Group is launching its “Move Over for Me” campaign, in an effort to broaden awareness and strengthen the Move Over law to protect all drivers on the roadside.

“For years, Slow Down, Move Over efforts have focused on emergency responders, and it’s critical that we continue to protect these individuals who come to the aid of motorists,” said Scott VerBracken, the vice president of automotive services for AAA and the Auto Club Group. “But as motorists get flat tires, break down, run out of gas, or find themselves otherwise in trouble at the roadside, they also face the dangerous elements of high-speed traffic and need the same protection.”

Florida’s current Move Over law requires drivers to slow down and move over one lane for:

It does not required drivers take evasive action for disabled vehicles.

While all 50 states have a Slow Down, Move Over law, nearly a quarter of all motorists still don’t know these laws exist (23 percent) . Meanwhile, the death toll keeps climbing.

Nationwide, nearly 350 people are struck and killed outside a disabled vehicle each year. Compared to other states, Florida had 112 deaths between 2016 and 2020. The only states with more fatalities were California (281) and Texas (268).

“Drivers can save lives if they make it a priority to move over for all vehicles on the roadside, regardless of whether it is a tow provider with flashing lights or a driver of a disabled vehicle with its hazard lights on,” said Mark Jenkins, a spokesman for AAA and the Auto Club Group.

As part of its “Move Over for Me” initiative, the Auto Club Group will advocate to strengthen Florida’s Move Over Law in 2023. Meanwhile, AAA is raising awareness of existing laws with advocacy messages on social media, community events, on service vehicles and in the Auto Club Group’s “AAA Living” magazine.

AAA has also created a series of videos. Among them is one called “Mean Tweets”, where AAA tow truck operators respond to real tweets received by AAA, including one that reads, “This is an occupational hazard. Deal with it!”

Despite the current law, the roadside remains a dangerous place to work. On average, one tow truck driver is killed at the roadside every other week.

To protect emergency responders, AAA and other traffic safety advocates have led the way in getting Move Over laws passed in all 50 states and the District of Columbia. This year, AAA is also working with the Towing and Recovery Association of America to introduce a federal resolution for a National Move Over Law Day. A national day is one more way to remind drivers of the importance of paying attention, slowing down and moving over when they see others at the side of the road working or stranded with a disabled vehicle.

Keep an eye out for emergency vehicles – including tow trucks – that have their lights on as well as cars that have their flashers on. Move over one lane when you see them and if you can’t move over, slow down to safely pass them.

Be a good passenger. Help identify roadway issues and remind the driver to slow down and move over.

Watch for people on the roadside. People may be in or near a disabled vehicle. Just because you don’t immediately see them doesn’t mean they aren’t there.

Pull as far over on the shoulder as safely possible to create more distance between your vehicle and passing traffic.

Turn your hazard lights on so other drivers are aware you are there.

If you are able to safely make it to the next exit or stopping point, do so.

Call for assistance via phone, website or the AAA Mobile app.

Remain with your vehicle as long as it’s safe to do so.

If getting out of your vehicle, watch the oncoming traffic for a good time to exit, and remain alert and close to your vehicle. Avoid turning your back to traffic whenever possible.

AAA: Gas Prices Continue to Drop Across Florida Thanks to Falling Oil Prices