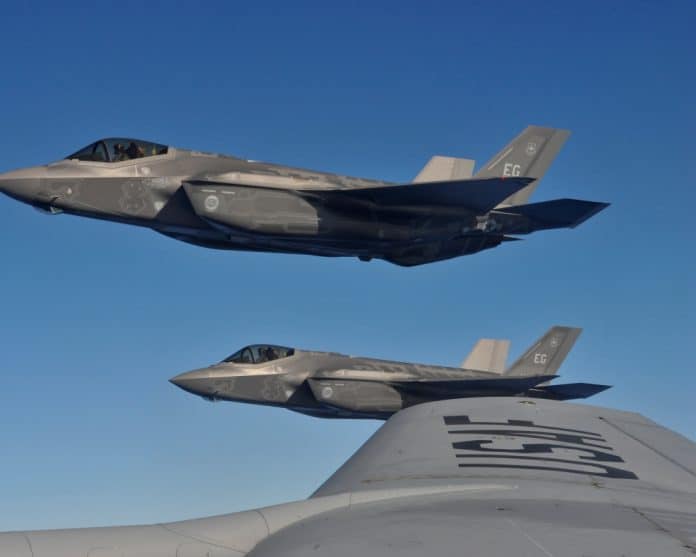 The Air Force is planning to rebuild Tyndall Air Force Base in the Panhandle after the damage caused by Hurricane Michael in October including bringing three F-35 Lightning II fighter squadrons to the base.

“The Air Force has done a preliminary evaluation to confirm Tyndall AFB can accommodate up to three F-35 squadrons. The operational F-22 Raptors formerly at Tyndall AFB can also be accommodated at other operational bases increasing the squadron size from 21 to 24 assigned aircraft,” the Air Force noted at the end of last week. “If this decision is approved and supplemental funds to rebuild the base are appropriated, F-35s could be based at Tyndall AFB beginning in 2023. Basing already announced in Alabama, Alaska, Arizona, Florida, Texas, Utah, Vermont, and Wisconsin will not be affected by this decision.”

U.S. Air Force Sec. Heather Wilson weighed in on the decision on Friday.

“We have recommended that the best path forward to increase readiness and use money wisely is to consolidate the operational F-22s formerly at Tyndall in Alaska, Hawaii and Virginia, and make the decision now to put the next three squadrons of F-35s beyond those for which we have already made decisions at Tyndall,” Wilson said.

“We are talking with congressional leaders about this plan and will need their help with the supplemental funding needed to restore the base,” she added.

“We have been given a chance to use this current challenge as an opportunity to further improve our lethality and readiness in support of the National Defense Strategy,” said Chief of Staff of the Air Force Gen. David Goldfein who also insisted the F-35 will have a major impact on Air Force operations.

“The F-35 is a game-changer with its unprecedented combination of lethality, survivability, and adaptability,” Goldfein said. “Bringing this new mission to Tyndall ensures that the U.S Air Force is ready to dominate in any conflict.”

The decision won the applause of members of the Florida delegation.

“After working closely with the U.S. Air Force to ensure Tyndall Air Force Base is fully rebuilt, the Air Force is asking Congress for the funds necessary to rebuild and receive the F-35 fighter jet. This announcement is great news not only for national security, but also for the people of Florida,” U.S. Sen. Marco Rubio, R-Fla. said. “I thank Secretary Wilson for her efforts, and I will continue working with my colleagues to get a disaster supplemental before the end of the year so that Tyndall and the communities in the Panhandle are fully restored in the aftermath of Hurricane Michael. While Tyndall has a long road to full recovery, I am proud of what the base leadership, Air Force personnel and their families have been able to accomplish in the weeks since the storm destroyed most of the base. I remain committed to seeing that Tyndall is fully rebuilt.”

“These squadrons of F-35s are the future of the Air Force and will strengthen our national security, while reinforcing the role of our airmen at Tyndall Air Force Base. It’s clear the Air Force recognizes the importance of investing in Tyndall as a part of our defense strategy and we are working to get the base back to mission ready capability as soon as possible,” said U.S. Rep. Neal Dunn, R-Fla.

“Bringing these next generation warplanes to Tyndall is in line with our efforts to rebuild a modern and state-of-the-art Air Force base post-Hurricane Michael. I look forward to working with the defense community to bring these squadrons in for a landing in our community,” Dunn added.