“These funds from the Department of Transportation will allow the City of Jacksonville the opportunity to further modernize and allow accessibility to all of its residents,” Lawson said on Friday. “This will serve to connect the community of Jacksonville and stimulate our vibrant economy.”

First elected to Congress in 2016 after spending almost three decades in the Florida Legislature, Lawson represents all of Baker, Gadsden, Hamilton and Madison Counties and parts of Columbia, Duval, Jefferson and Leon Counties. 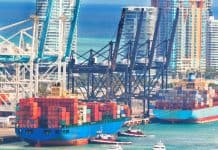