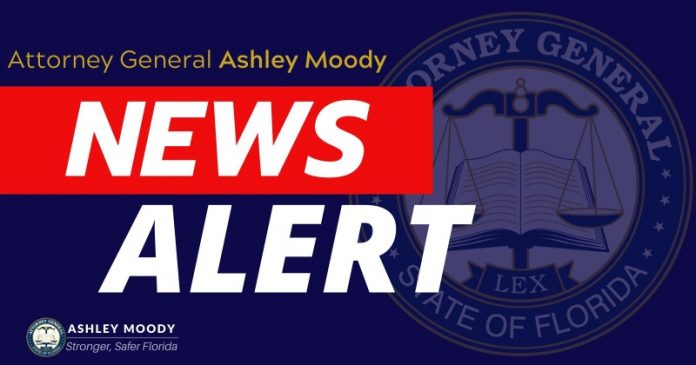 Moody’s Statewide Prosecutors secured a 13-year prison sentence for Michael Hill after the defendant coerced the teenager to engage in car dates with paying customers and then took a cut of the profit. Hill also used the victim for the creation of child pornography.

“This monster exploited a runaway teen, transported her hundreds of miles away and forced her into the underground world of sex trafficking and child pornography—all so he could make money off her misery. Thankfully, Florida State Troopers rescued the victim and my Statewide Prosecutors worked to ensure this human trafficker will spend a long time in prison for his atrocious crimes,” Moody said.

Florida Department of Law Enforcement Commissioner Mark Glass said, “FDLE agents and FHP troopers recovered multiple firearms, large quantities of illegal drugs and cash, wrote more than 50 search warrants and recovered and reviewed terabytes of data as part of this complex, major criminal investigation. I applaud their diligence and dedication pursuing all evidence to ensure this dangerous and violent suspect geos to prison for a long time.”

Homeland Security Investigations Jacksonville Assistant Special Agent in Charge K. Jim Phillips said, “Child predators perpetrate evil against our most vulnerable and will always be a primary focus for HSI special agents. This predator is going to spend a significant amount of time behind bars thanks to the professional dedication of HIS, FDLE and the Florida Highway Patrol.”

Director of the Florida Highway Patrol Colonel Gene S. Spaulding said, “The Florida Highway Patrol has a great working relationship with its law enforcement partners across the state, and I would like to personally thank Attorney General Ashley Moody and all of our state and federal partners for their unwavering support and cooperation with FHP. There is no doubt that, by working together, we can help protect the victims of these heinous crimes.”

The case began during a car chase involving Hill, a convicted felon at the time of the incident, where Hill fled the scene after crashing a car. Inside the vehicle, Troopers found a female minor, identified as a runaway from the Florida Department of Children and Families. The investigation determined that Hill transported the minor from South Florida to Okaloosa County to engage in sex work. After multiple search warrants on Hill, law enforcement found illegal firearms, illicit drugs and money.

The investigation also uncovered that Jessie Maguire Stebenne, a trust specialist with Miami-Dade Public School, knew the victim absconded from DCF custody, as well as the fact that the minor performed at strip clubs. Instead of reporting this information to the proper authorities, Stebenne blurred the lines of a professional relationship between student and counselor. Stebenne pled to charges of failing to report child abuse, interference in custody and contributing to the delinquency of a minor.

Hill is convicted of one count of human trafficking of a minor, a first-degree felony, and one count of production of child pornography, a third-degree felony. The Honorable Judge Christopher Patterson, the Chief Circuit Judge for Washington County, sentenced Hill to 13 years in prison for the crimes. Hill is also designated as a sexual predator, requiring lifetime registration.