Former Vice President Joe Biden put his foot squarely in his mouth during the debate last week when talking about energy policy.

Many pundits thought Biden would make that kind of gaffe in the first debate but President Donald Trump’s frequent interruptions ensured that would not happen. However, during the second and final presidential debate, Biden made a mistake when he declared that America needed to transition from oil and gas to green energy.

The energy (fossil fuel) industry is one of the largest in our country according to the U.S. Energy Information Administration. In 2019, 81 percent of our energy consumption was tied to petroleum, natural gas and coal, leading to 1,122,764 jobs and generating $181 billion in total revenue.

Furthermore, for the first time since 1957, America produced more energy than we consumed last year. Interestingly, while energy production grew by 5.7 percent in 2019, energy consumption actually decreased by 0.9 percent.  While natural gas continues to top energy production, followed by crude oil, coal, nuclear power and natural gas plant liquids in descending order for a total of 89 percent of production sources, the other 11 percent is comprised of biomass, wind, hydropower and other sources, including solar.

It is more than fair to assume that any so-called “transformation” from fossil fuel to green energy would have major disruptive consequences for our national economy.  Luckily, we have a state that has been experimenting with this transformation for some time now in California, where rolling blackouts are a common experience because reliance on green energy is intermittent and isn’t capable of matching demand to supply in an efficient manner.

“Between 2011 and 2017, California’s electricity prices rose five times faster than they did nationally,” Environmental Progress noted. “Today, Californians pay 60 percent more, on average, than the rest of the nation, for residential, commercial and industrial electricity.”  This is not a model that the rest of the country should follow.

This is “Californication” with few concepts from the Golden State worthy of replication. Not only are electricity costs in California over the top, gasoline prices are also the highest in the nation.  This is because the California Progressives continue to push the absurd principles of carbon neutrality which includes high gasoline taxes, higher than national standards requirement for gas mileage and, just recently, the outlawing of gasoline vehicles by 2035!

What Californians are now experiencing is what the rest of our country will endure if we allow Far Left politicians to implement the New Green Deal (NGD) advocated by U.S. Rep. Alexandria Ocasio-Cortez, D-NY, and U.S. Sen. Ed Markey, D-Mass.

What I did not know until recently is that the NGD is not just about mitigating climate change, it is also about economic inequality.  Forgetting economic inequality a moment, combating climate change is wishful dreaming because Communist China, India and Russia, all of which still rely on extensive use of coal-fired plants, still spew out toxic chemicals and haze which cannot simply be limited to within their national borders. As volcanic eruptions can show, the wind does not respect national boundaries. The unilaterally expensive remediation called for by AOC, the Bernie Bros and U.S. House Speaker Nancy Pelosi, D-Calif., to be imposed on American industry will never guarantee carbon decline in our air or a substantial difference in climate change.

Even an international treaty – the Paris Accord – which thankfully Trump withdrew the U.S.  from, was unenforceable and had loopholes large enough for a wind turbine to slip through.  Had America tried to live up to the Paris Accord, industries across the nation would be hindered with expensive regulatory costs which would make the U.S. uncompetitive.

Clean energy is not really clean though it is, admittedly, cleaner.  To manufacture wind turbine blades, toxic chemicals must be used and then carefully disposed of since they are, at this time, still “extremely hard” to recycle.  A turbine tower on average is around 280 feet high (about the same height as a 28-story building). These towers are noisy, ugly and kill somewhere between 328,000 to 573,000 birds indiscriminately every year.

Solar has its own unique set of problems including the currently high initial costs (solar panels, inverter, batteries, wiring and installation); being weather-dependent; solar energy storage being so expensive that some experts say it makes more sense to use it during the day and switching back to fossil fuels during the night; the amount of acreage needed for a solar farm; pollution from the transportation and installation of the panels; and, just like wind turbines, the manufacture of photovoltaic systems requires toxic materials and hazardous gasses.

Meanwhile, fracking has become an anchor around Biden’s neck since he does not seem to know whether he is for it or against it.  But, his running mate, U.S. Sen. Kamala Harris, D-Calif.,  was an early co-sponsor of banning fracking in the U.S. Senate. With avid support from AOC and a host of others, the future of fracking is in doubt if Biden gets elected.  Though fracking has been around since 1947, as recently as 2015, there were around 300,000 hydraulically fractured wells. Today, there are more than 1.7 million wells producing more than 7 million barrels of oil and 600 trillion cubic feet of natural gas. Fracking also directly employs around 636,000 people.

Without petroleum, we would all be screwed as more than 144 everyday products are made from its derivatives, including tires, boats, antiseptics, shoes, deodorant, paint, shampoo, aspirin, eyeglasses and detergents, to name just a few.

America can not afford to be Californicated energy-wise and the NGD would only exacerbate energy costs and issues.  Americans expect to be able to walk into any room, flip a switch and have the lights come on.  Neither industry nor consumers will be satisfied to pay higher energy costs offset with less dependability and sustainability.  Furthermore, our national security is dependent on fossil fuels since the U.S. military is the largest consumer of energy.

Transforming from fossil fuels to green energy and a ban on fracking will lead to the Californication of America.  Think twice before you vote for Joe Biden.

Barney Bishop III, is a former executive director of the Florida Democratic Party and immediate past-CEO of Associated Industries of Florida, founded in 1920, and known as “the Voice of Florida Business.”  He currently is the CEO of Barney Bishop Consulting, LLC and he can be reached at Barney@BarneyBishop.com. 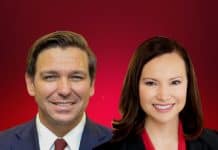