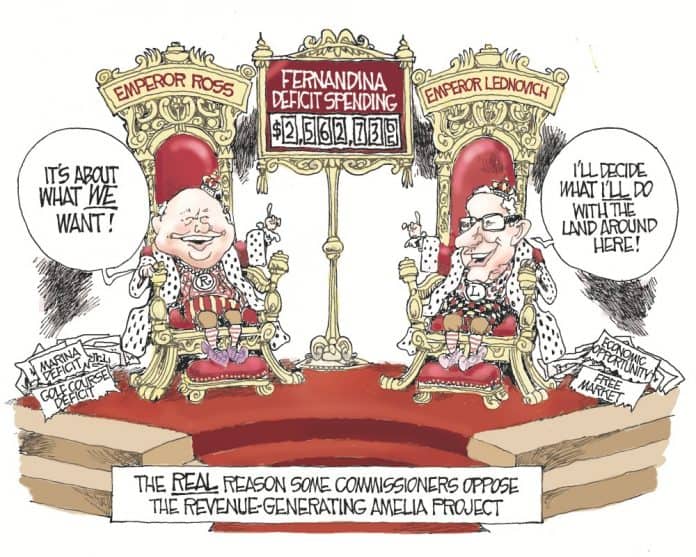 Fernandina Beach is known as “The Isle of Eight Flags” because of all of the entities whose flags have flown over the place during its long and storied history: But today, Fernandina Beach is in danger of becoming better known as “Bully Town” — where a bright future is being hijacked and jeopardized by two rogue, out-of-control city commissioners whose self-aggrandizement and dictator-like grandstanding have made them bullies on the bully pulpit.

Smart growth is important for any good community that values balancing the equities for enhancing its economy while also protecting its resources and quality of life. But an exciting new project that promises to do just that — promote a stronger economy while also respecting the community’s beautiful heritage — is being unfairly attacked and sabotaged by the two maverick elected officials who have placed their own penchant for abusing power over the real public interest.

According to numbers shared by the Fernandina Beach City Manager, the city is stuck with two white elephants: the city-owned golf course and the marina. Together, these two financial losers are projected to drain about $1.4 million from local taxpayer coffers annually. As everyone in Fernandina now knows, property taxes are expected to grow in part to make up that shortfall.

So, citizens here should be asking themselves how any city commissioner could say, “no” to a potentially game-changing clean, positive new development before it’s even been presented — especially when it can lessen the financial burden likely to otherwise fall on taxpayers. The often-inaccurate, untrue narrative and politically motivated cheap shots that Mike Lednovich and Chip Ross keep piling on this new project reflect a level of irresponsibility rarely seen in northeast Florida local government. It’s a betrayal of the public trust delivered in a negative and destructive pattern that should cause voters and taxpayers to wonder how or why they ever entrusted any power at all to these two guys.

Let’s set the record straight and illuminate the public landscape that has been so clouded by the Lednovich/Ross attack bombs. We can do that simply by relying on something the two bad-boy commissioners have failed to do: share the facts and the truth. Plans for an auto-centric community on what is now the Amelia River Golf Club represent such an exciting opportunity for Amelia Island and the city of Fernandina Beach.

In a recent interview with local media, developers Steve Leggett and Bill Riddell, who lives in Fernandina, presented positive details from a dramatically scaled-down version of the plan they unveiled in June. Their updated effort reflects a real sensitivity to what they’ve learned by listening to the community. Still, this new plan has been met with rude and wrong dismissal by the Lednovich and Ross — though they have yet to see this measurably improved and updated plan. How irresponsible is that? Totally, is the answer.
For these bully commissioners, it doesn’t matter that the developers have spent the months since their June presentation working to address the concerns of residents and community leaders. It doesn’t matter to the rogue duo of electeds that developers have eliminated concerns about any noise, including the fact that there will be no racing whatsoever at the site. And, it doesn’t matter to Lednovich/Ross that 70 percent of the property will be green space and they’ll be planting way-more trees than are lost. Finally, it doesn’t matter to the bullies that the project eliminates the traffic associated with the 30,000 rounds of golf played there now or that it will use just the one existing entrance to the golf course.

None of this matters, apparently, because these two arrogant commissioners shallowly believe they know better than everyone else. They know so much, in fact, that they don’t even need to see the plans before they oppose them. And, ultimately, these two commissioners seem to believe that raising taxes is better than attracting businesses, tourists and private-sector investment and revenue.

Back in June, the plans Leggett and Riddell presented to the city commission were met with outspoken opposition. So, what did they do? They took the parts of their plan that were concerning residents and they directly addressed them. In short, they acted responsibly and respectfully and took action to measurably compromise their project to ensure harmony between their plan and the community.

I don’t think it’s too much to expect city commissioners to comport themselves similarly — responsibly and respectfully. They were, after all, elected to represent the people of this community and to work a public-interest agenda, not a personal agenda fueled by bloated egos.

Instead, Lednovich has held court on Facebook — giving life to seemingly every misrepresentation and unfounded rumor by hitching his sagging credibility to the negative narrative. And, his public sector accomplice-in-slime, Ross, has been just as brutally wrong and mean spirited in offering his opposition to anyone who will listen. Despite the facts and truth, both of these men consistently insist on calling this a “race track.” That’s not true — and they know it’s not true. So, this big lie only lives because these two bully commissioners are slinging bull, but not truth. Intentionally.

This is disrespectful public officer behavior bordering on malfeasance in office because it defines an abandonment of all principle. It also sends a loud and clear message to entrepreneurs across the country that they should take their business elsewhere — if these two bullies continue to wield their abusive power play to discourage, deter, delay or deny positive progress.

Let’s be clear here: this island is home to a thriving community of auto enthusiasts, including numerous auto clubs. It is also home to one of the world’s pre-eminent auto exhibitions in the Concours d’Elegance. It’s also clear that our city desperately needs the clean revenue that this exciting development would regularly generate. Like any other good citizens, Leggett and Riddell have earned the right to be heard in a fair and open forum.

These respected business leaders have proven they are willing to significantly invest in the community — and, to significantly compromise to get the project on track. After being met with disapproval at a commission meeting back in June, they went back to the drawing board and worked to truly address the legitimate concerns of residents.

Here’s the bottom line, folks. Fernandina Beach has an exciting new project on its horizon that deserves a fair hearing because it represents a bold, good way to forge a clean path to the community’s economic future. If Lednovich/Ross seek to make history by these continued poison political pranks, it is likely to be really bad history that will be their ultimate legacy, built on lies.

It is the job of all city commissioners to keep an open mind and to help ensure the quality of life of the community. But voters and taxpayers should demand these two do their jobs as public servants, rather than act like political thugs. There’s still time for these two guys to save their reputations and political careers by putting the ‘public service’ back in their work rather than keep blindly moving as if ‘self service’ is what they were elected to do.