As Florida enters Phase I of its reopening, some governments are doing their best to remove red tape and help small business owners while others are putting up barriers that make it more difficult to survive. Nowhere is this more evident than Central Florida’s restaurant industry.

As restaurants scramble to reopen and try to become profitable again, Edgewood Mayor John Dowless was among the first to help.

The city held an emergency meeting as soon as Gov. Ron DeSantis announced the Phase I reopening to allow restaurants to expand their outdoor seating as long as Americans With Disabilities (ADA) requirements are met.

“I had talked to a few business owners and they said that at just 25 percent inside just would not justify them bringing all of their employees back in and stocking back up on inventory with a food purchase. So as soon as I saw the executive order, I knew what we had to do,” Dowless told Florida Daily, insisting if they had not done this, it would have been a red tape nightmare.

“Not all red tape is bad, but in this case, if somebody wanted to put tables and chairs where parking places were, they would normally have to go through a site plan, and amend it and get it approved before they could do that. You have to check how many parking spaces, how much seating capacity there is before you can do it. That could take weeks to get done,” he added.

The city of Orlando is going even further with a vote scheduled on Monday on a package that will allow the same types of accommodations, expand them to retail outlets as well, allowing them to erect 10 by 10 tents outside their stores to expand their capacities to sell.

Orlando Mayor Buddy Dyer said it is time to get to work responsibly.

“We know, there are few, if any, businesses that have been immune to the impacts of this global pandemic,” said Dyer. “Whether closing completely, limiting operations or having employees work remotely, our employers and entrepreneurs have helped us control the spread of this virus and now we can begin to reopen our economy responsibly. Our local businesses provide a livelihood for our residents and are at the heart of everything we do as a community and so we want to do what we can to support them on the path to recovery.”

Any tent larger than 12 by 12 would need a permit by state law. Cities will now have to decide whether or not to enforce those state regulations or leave it to the state Department of Business and Professional Regulation.

For Edgewood, the decision was simple.

“It was about jobs. It was about paychecks, and it was about enabling these business owners to have doors to open. If we went much longer like we were with little to no business, I was fearful they would not have a business to go back to,” Dowless said.

Things are not looking that rosy in unincorporated Orange County and there are jobs on the line there. The county has not made those kinds of exceptions–and for Groovy Goat owner Andy Gross “it’s hard to plan anything when you don’t know”.

Gross’ restaurant is new so he doesn’t have an established customer base to weather the storm. He tried doing take out only when the pandemic began but had to stop because the customer base just was not there. Gross plans to use the parking lot to provide socially distanced spaces for customers.

“What the experts are saying is you are less likely to catch anything outside versus inside, so people might feel likely to go out or more comfortable if they are outdoors. That’s why we want to maximize the outdoor space and the area outside,” Gross said.

The problem is that will require permits in Orange County, leaving Gross tangled in red tape.

“We were told a path to go through, and we started going through that path and were still denied. We had a big event trying to plan for this week, and we had to push it off a week. There is no way we could do it without having approval from the county,” Gross said.

But it’s impossible to get permits with county offices closed. Gross is losing as much as $30,000 a week, and is only hanging on thanks to a federal Paycheck Protection Program (PPP) loan.

“That gives you eight weeks to fund the staff,” Gross said about the PPP loan. “I’m in week three. We got the money while we were still shut down and could not operate. So you have only eight weeks to use that from the day you get your money. So we have a limited time with the forgivable loan to operate and get our revenues back up.”

Gross has a message for Orange County Mayor Jerry Demings.

“Trust us that we do not want to cause harm. We just want to get open and operating and start revenue coming in again,” Gross said.

Other cities in Florida, like Melbourne, are allowing extra seating and waiving rules on what kinds of signs and banners can be put up so customers can see that places of business have reopened. Winter Park is doing a Mother’s Day special, closing down Park Avenue entirely to vehicle traffic so that the famed retail and restaurant strip can serve added customers with tables right in the street. 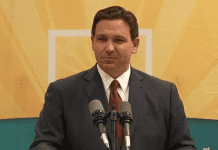