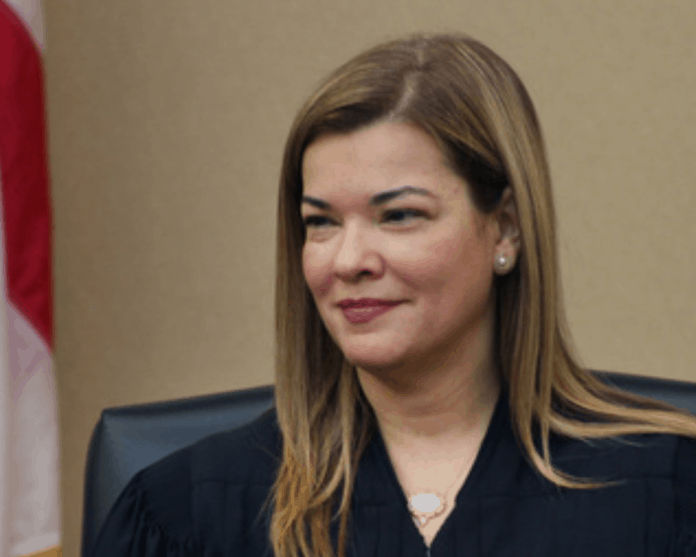 Less than 24 hours after he was sworn in, Gov. Ron DeSantis named Florida Third District Court of Appeals Judge Barbara Lagoa, a conservative, to the Florida Supreme Court.

“Justice Lagoa’s proven commitment to upholding the rule of law, unparalleled legal career and vast experience on the appellate bench distinguish her among the most qualified individuals to serve on our state’s highest court,” DeSantis said at an event in South Florida on Wednesday. “It is my pleasure and my privilege to appoint Barbara Lagoa to the Florida Supreme Court with full confidence she will serve our state with the utmost integrity.”

“First appointed to the Third District Court of Appeals by Governor Jeb Bush in 2006, Justice Lagoa was the first Cuban American woman to serve on the Third District Court of Appeals. As an appellate court judge, she has more experience than any of the other nominees put forward by the Supreme Court Judicial Nominating Commission.” DeSantis’ office noted. “Justice Lagoa graduated from Florida International University with honors in 1989 and from Columbia University School of Law in 1992, where she served as an editor to the prestigious Columbia Law Review. Justice Lagoa worked at numerous prominent law firms in Miami, including Greenberg Traurig and Morgan, Lewis & Bockius. Justice Lagoa has received numerous awards, including the ‘Outstanding Women of Color’ award from the Black Law Student Association and the Caribbean Law Student Association at St. Thomas Law School. The award was presented for her outstanding contributions as a sitting judge on the Third DCA. In 2003, Barbara joined the United States Attorney for the Southern District of Florida in Miami as an Assistant United States Attorney, where she worked until her appointment to the bench in 2006. Over her 12 years on the appellate bench, Justice Lagoa has heard more than 11,000 cases and issued more than 470 written opinions.”

William Large, the president of the Florida Justice Reform Institute which supports the business community over trial lawyers, praised the appointment.

“Governor DeSantis’ appointment of Justice Lagoa as the 87th Justice to the Florida Supreme Court is the first step towards fulfilling his promise to appoint judges who will interpret the law and not legislate from the bench,” Large said. “The Florida Justice Reform Institute, on behalf of the business community, has long called for judges who are textualists — who will say what the law is, and not what they think it should be — and who show deference to the legislature as the rightful policymaking branch of government.”

“Justice Lagoa brings these exact qualities and an impressive record to the Court at a critical time. The Florida Justice Reform Institute applauds Governor DeSantis’ on his wise and thoughtful choice that will have a profoundly positive impact on Florida for a long time,” Large added.

Florida Family Policy Council President John Stemberger, one of the top religious conservatives in the state and an attorney, also praised the new Supreme Court justice.

“Governor Ron DeSantis has made a simply outstanding choice in Barbara Lagoa for the Florida Supreme Court,” Stemberger said. “She is smart, thoughtful, and has a conservative judicial philosophy that appreciates the limited role of the court.  She is also deeply committed to her faith, her family and her community.  In the world of judicial appointments, Barbara Lagoa is a home run.  Governor DeSantis should be highly commended for a very thorough vetting process and a commitment to appoint such highly principled Justices as Barbara Lagoa.”

Liberal group Progress Florida launched a preemptive attack earlier in the week, bashing DeSantis for not looking more at African Americans to serve on the state Supreme Court.

“Gov. Ron DeSantis is expected to tout a ‘bold vision for a brighter future’ at his inauguration. What he is unlikely to mention is that due to the outsized political influence on the nominating process he will be remaking the Florida Supreme Court with no African American representation for the first time in decades. Gov. DeSantis has the opportunity to begin to right this wrong by supporting important reforms to help ensure Florida’s courts better reflect the diversity of our  state,” the group noted.

“The current system has clearly failed to reflect the nonpartisan, diverse, and qualified judiciary the people of Florida want and deserve,” said Trelvis Randolph, General Counsel of the Miami-Dade Branch of the NAACP. “Gov. DeSantis has the opportunity to begin to right this injustice and set Florida up for a brighter future.”

“Senate Bill 138 and House Bill 93 would overhaul the commission process to ensure that those who choose Florida’s judges are reflective of the diversity of Florida, rather than serving as a partisan political tool of the governor’s office, as it has been under Rick Scott,” Progress Florida insisted. “Florida’s judicial system was once a model for the nation. Unfortunately, that’s no longer the case. A report by the Florida Access to Justice Project found that political influences have become a greater threat to the independence of the courts and its ability to act as a check and balance.  When the Judicial Nominating Commissions were established in the 1970s they were supposed to act independently as a check on executive power but that has changed in recent years. Gov. Rick Scott has rejected approximately 90 Florida Bar recommendations for JNCs, pushing them closer to being a political arm of the Governor’s Office.

“What’s more, Florida’s population is 22 percent Hispanic and 16 percent African-American. Yet among the state’s judiciary, fewer than nine percent of judges are Hispanic, and fewer than seven percent are African-American. The American Constitution Society for Law and Policy issued a report, ‘The Gavel Gap,’ which assigned Florida an overall grade of ‘F’ when comparing the race and gender composition of the courts and the communities they serve,” Progress Florida added.