The two men who want to be the next governor of Florida left nothing on the table in their final debate in Davie on Wednesday night which was televised to a statewide audience.

Supporters of Republican Ron DeSantis could take heart on several fronts.  Their candidate hammered Democrat Andrew Gillum on education policy when asked the debate focused on charter schools. In a particularly devastating exchange, DeSantis railed on the Democrat for wanting to end charter schools in Florida entirely, saying parents should make the decision on where their children should go to school.

“Anyone and anything for profit you would get rid of,” DeSantis said. “That means you want to upend the lives of 240,000 students in the state of Florida and again these are students whose parents are making these decisions.

“What Andrew is saying is really going to disrupt a lot of families who finally have a school that is right for them,” DeSantis added.

The Republican also scored major points on immigration, including about sanctuary cities in Florida, hammering Gillum by saying the Democrat would let illegal aliens that are convicted of major crimes back on the streets once their sentences were over. Gillum did not directly respond that he would not do that until the very end of the exchange, making him look soft on crime.

DeSantis also did well when he turned to the role of the middle class in Florida’s economy, slamming how tax hikes would impact the state.

“Andrew is complaining about the economy,” DeSantis said. “We are in a situation now where unemployment is like 3.7 percent. We are on a roll. I don’t think we have reached our potential. If we do it right, we can expand economic Florida’s base. We can have a strong technology sector, strong manufacturing, strong finance. We can get to the point like Texas did where if there is a national recession, Florida is recession proof because we are attracting so much investment, but we have to have a low tax climate.”

Still, DeSantis hurt himself with style points. He often talked over the moderator, failing to answer the questions in a timely manner and continued to ramble even after it was made clear his time was up. The Republican nominee also got downright angry over a question he did not like about other attendees at conferences he spoke at, including those led by David Horowitz. “How the hell am I supposed to know every single statement somebody makes?” DeSantis demanded.

DeSantis was clearly miffed and told the crowd he will not bow down to political correctness and will not let the media smear him. Gillum’s immediate response was that his grandmother told him that a hit dog will holler. DeSantis then said Gillum always plays the victim, something that did not sound especially gubernatorial.

Gillum seemed more polished than in the first debate and was ready with snappy one liners. He scored points by giving spirited response, including his explanation as to why he wanted to raise the corporate taxes, saying only 3 percent of corporations that do business in Florida would pay the higher rate, or any corporate taxes at all. The Democrat also noted that  those same companies got a $6 billion windfall when Republicans passed a tax cut in Washington last year.

“They can keep $5.3 billion but we deserve a billion of that to come into this state to pay our teachers a wage they can live on,” Gillum said. “Offer access to high quality early learning for our children and…reinvest in apprenticeships, woodwork, shop, mechanical, electrical, technical’ all of the training programs they can use to get a job, monetize that job, and go to work and earn a wage.”

The Democratic nominee also did well on answering about “Hamilton” tickets he received on a trip to New York. Those tickets came from his brother courtesy of an FBI agent.  Gillum owned up to a mistake, something politicians are usually not good at. While still calling the DeSantis attacks a lie, he answered that he should have asked more questions about those tickets when his brother gave them to him. Gillum said he was under the impression they were paid for by his brother by giving the then undercover FBI informant Jay Z tickets in exchange. He even ended the discussion with a snappy one liner, saying “In the state of Florida, we’ve got 99 issues, but Hamilton ain’t one of them”.

Gillum fell short in some areas in the same way his opponent did. The Democrat seemed ready to jump right into the mud when given the opportunity, calling DeSantis a liar and begging the moderator for extra time to deflect the repeated attacks of his Republican challenger. He was even willing to make fun of his own city in a response which elicited what sounded like boos and groans from the crowd. On the discussion of the crime rate in Tallahassee, Gillum snapped back with this one liner that fell more than flat.

“I would suggest the congressman might want to reconsider whether he wants to be governor. The Governor’s Mansion is in Tallahassee.  I would hate for you to be hurt,” Gillum said.

Partisans from both sides way will claim victory. Liberals will love how Gillum defended the tax hikes and talked about getting better wages for the large number of workers in Florida that are at or below the poverty line. Conservatives will love how DeSantis talked about being willing to protect the Second Amendment and the rights of law abiding citizens to own guns and his promise to keep Florida a low tax state.

Now it’s off to the polls–unless you are one of the more than 1 million Floridians who already cast their ballot before the final debate. 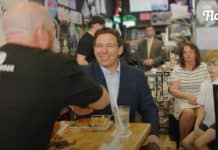 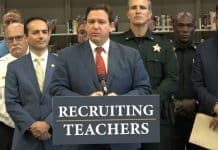