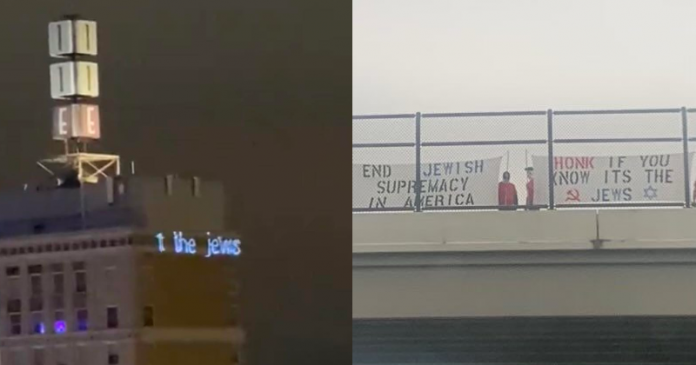 Elected officials in Jacksonville and across the state condemned anti-Semitic messages that appeared on the First Coast and across Florida in recent days.

On Saturday, a message praising rapper Kanye West’s recent anti-Semitic comments was projected on the outside of TIAA Bank Field, where the University of Georgia Bulldogs defeated the University of Florida Gators as their longstanding college football rivalry continued. The message was also projected on at least one other building in Jacksonville this weekend, while there have been reports about banners with anti-Semitic banners on highway overpasses on the First Coast in recent days.

Jacksonville Mayor Lenny Curry quickly weighed in to condemn the banners and messages.

“Jacksonville is a city made better because of its diversity. Those who spread messages of hate, racism and antisemitism will not be able to change the heart of this city or her people. I condemn these cowards and their cowardly messages,” Curry said.

“The kind of anti-Semitic hate speech being circulated online purportedly from the Florida-Georgia game is despicable and extremely disappointing. There is absolutely no room for this sort of hate in Northeast Florida. I continue to stand in support of the Jewish community in Jacksonville and across this nation,” Rutherford said.

U.S. Rep. Debbie Wasserman Schultz, D-Fla., agreed with Curry and Rutherford as she weighed in on recent racist and anti-Semitic graffiti in Weston.

“I am disgusted at the antisemitism and racism that continues to rear its ugly head here in my home state of Florida. The recent spike in high-profile and public antisemitism, both in Northeast Florida and now with repeated cases in my own hometown of Weston, is a deeply alarming and heartbreaking trend. This hatred must be called out forcefully. It is incumbent on all of Florida’s leaders to unequivocally condemn this dangerous rhetoric. Only when we unite to vocally condemn the perpetrators of these hateful acts, can all Americans truly love, learn and worship freely and without fear,” she said.

Synan Says, the Real Top 25 in College Football: Big Wins in the Time of COVID-19