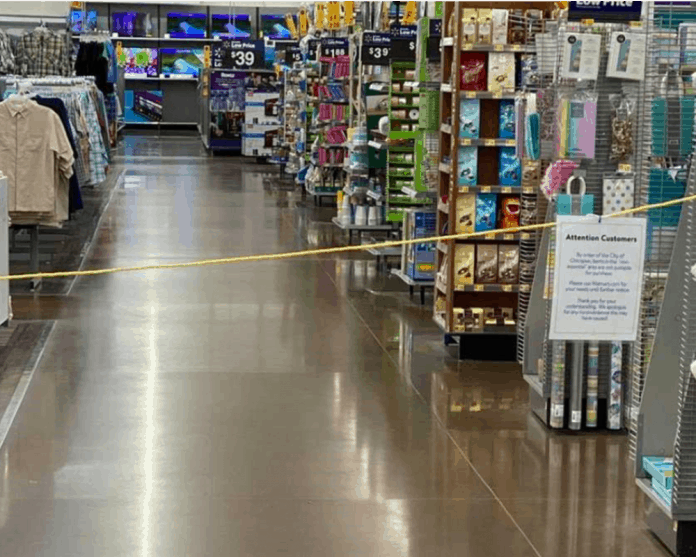 In order to reduce the threat of the coronavirus, several cities and states throughout the country are requiring large retailers to stop selling non-essential items in their stores.

Officials for those governments are calling on larger retailers to restrict foot traffic to non-essential goods by shutting down aisles and closing down parts of the store.

These officials say they hope to lower the number of people crowding in a closed environment and to reduce the volume of traffic to slow the further spread of the coronavirus. Colorado, Massachusetts, Missouri, Indiana, Michigan and Vermont have already taken steps in this direction with possibly more states to follow their example.

In some of these states, local governments have even gone as far as ordering stores to and empty the areas with nonessential items or roping them off from customers.

Asked if this could happen in the Sunshine State, a legislative aid in Tallahassee told Florida Daily, “Possibly on a local level, but not on a state level.”

Melbourne City Councilman Paul Alfrey agreed with that, saying that kind of shutdown is “not happening here.”

Alfrey said if retailers want to limit what is being sold their stores, they have the right to do so but he would not support a local law forcing that decision on them.

In Jacksonville, where Mayor Lenny Curry has called for a stay at home order, so far the local government has not put limits on stores like Walmart or Target.

Jacksonville City Councilman Rory Diamond said the topic of limiting what retailers can sell has not come up before the council.

“If this issue were ever to come up on an agenda item, I would vote it down in a heartbeat,” Diamond told Florida Daily. “A move like this is too draconian to me.”

South Florida has been more open to mandating retailers like Walmart and Target from selling non-essential items.

“It’s been a light topic but it has come up and I wouldn’t be surprised if some of the South Florida communities try to pass an ordinance forcing companies to stop selling non-essential items,” said Lynch.

Lynch said any effort to do this statewide would be ridiculous.

WBOB Talk Radio News Director Roger Henderson said the majority of callers to the First Coast station are against telling big-box retailers what they can and can not sell.

Henderson said that some callers mentioned that if cities were going to try this, they should do it in areas where more people tested positive for coronavirus such as in South Florida.

Government officials insist their mandates only apply to in-store activity, and people wanting non-essential items can still in and purchase these items and use delivery and curbside pickup options.

Vern Buchanan: FCC Needs to Do More to Ensure Telephone Companies Crack Down on Spam Calls