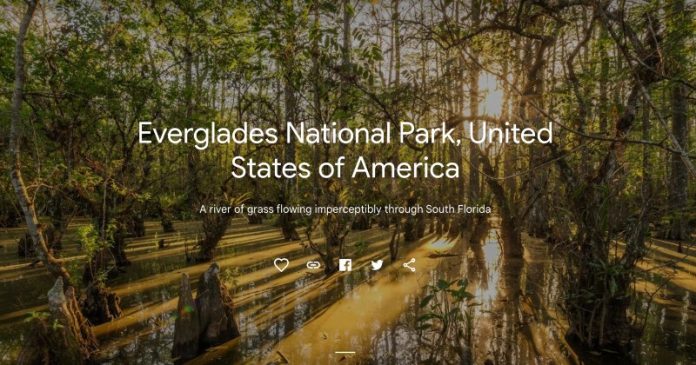 This week, the Everglades Foundation announced a new digital exhibit of “The River of Grass” created for the UNESCO World Heritage Collection on the Google Arts and Culture platform.

The project, launched during the 50th Anniversary of the UNESCO World Heritage Convention and the 75th Anniversary of Everglades National Park, showcases images by 18-year-old nature photographer Luca Martinez along with captions highlighting the intricate history and ecology of the Everglades ecosystem.

A senior at Palmer Trinity School in Palmetto Bay, Florida, Martinez has garnered more than 880,000 followers on Tik Tok and over 200,000 on Instagram with his impressive underwater videos and photography of the Everglades ecosystem.

“The Everglades is a misunderstood place,” said Martinez, who uses social media to raise awareness and educate others about the many threats facing Florida’s environment. “Too many think of it as dangerous and dirty, but we would not be here without the Everglades providing our drinking water. The way to save this place is to share it and let other people experience it.”

All images and videos in the online exhibit – which was created in partnership with Visit Florida– were shot by Martinez. The enchanting views help illustrate the ecosystem’s various habitats, wildlife, hydrological systems, its history, and connection to the South Florida communities that surround it.

“Everglades National Park is a world treasure,” said Eric Eikenberg, the CEO of the Everglades Foundation. “It has been an honor to partner with Visit Florida to showcase this UNESCO World Heritage Site, the only U.S. location on the List of World Heritage in Danger due to the serious and continuing degradation of its aquatic ecosystem.”

Google Arts & Culture is a non-commercial initiative that works with cultural institutions around the world to preserve and bring the world’s art and culture online so it’s accessible to anyone, anywhere. This project to digitize heritage, which was created on the platform in partnership with UNESCO, offers a glimpse into dozens of World Heritage Sites around the world to help bring awareness and protection.