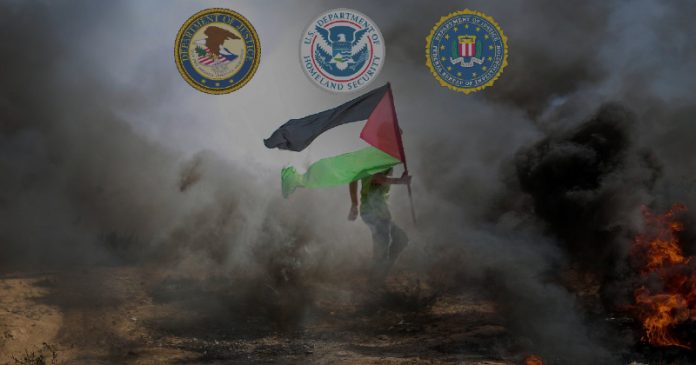 Members of the Florida congressional delegation are calling for a federal investigation of the Mapping Project, which is part of the Boycott, Divestment, Sanctions (BDS) movement targeting Israel.

The Mapping Project defines itself as a “multi-generational collective of activists and organizers on the land of the Massachusett, Pawtucket, Naumkeag, and other tribal nations…who wanted to develop a deeper understanding of local institutional support for the colonization of Palestine and harms that we see as linked, such as policing, US imperialism, and displacement/ethnic cleansing.”

The Mapping Project’s website includes the address of many locations, including, as critics note, “Jewish places of worship, businesses, schools, and other public centers.”

“Our work is grounded in the realization that oppressors share tactics and institutions – and that our liberation struggles are connected. We wanted to visualize these connections in order to see where our struggles intersect and to strategically grow our local organizing capacities. Our interactive map illustrates some ways in which institutional support for the colonization of Palestine is structurally tied to policing and systemic white supremacy here where we live, and to US imperialist projects in other countries. Our map also shows the connections between harms such as privatization and medical apartheid, which are often facilitated by universities and their corporate partners. Since local universities engage in these multiple forms of oppression and produce much of the ruling class, and because they are major land holders in our area, we’ve emphasized the university as a central nexus that ties together many of the harms traced on the map,” the Mapping Project notes on its website. “We acknowledge that our map is not a complete representation of local institutions responsible for the colonization of Palestine or other harms such as policing, US imperialism, and displacement. We also recognize that the struggles of local Indigenous nations against US colonization are underrepresented on our map. We would be grateful for suggestions and knowledge shared with us by those who engage with our map, and hope it can continue to grow and improve through your contributions.

“This map is intended first and foremost to cultivate relationships between organizers across movements and deepen our political analyses as we build community power. Building community power, for us, has meant seeking the knowledge of those organizing in community with us and highlighting the radical analyses and resistance of earlier generations which have been suppressed,” the group insists. “Our goal in pursuing this collective mapping was to reveal the local entities and networks that enact devastation, so we can dismantle them. Every entity has an address, every network can be disrupted.”

“As you are no doubt aware, on June 3, 2022 an Eastern Massachusetts organization associated with the Boycott, Divestment, and Sanctions (BDS) movement published the Mapping Project. We fear that this map may be used as a roadmap for violent attacks by supporters of the BDS movement against the people and entities listed therein. We ask that you investigate the use of the Mapping Project by extremist organizations, provide any necessary enhanced security for targets listed in the Project, and work with social media companies and internet service providers to prevent its further distribution,” the House members wrote.

“We must not turn a blind eye to this dangerous incitement,” they added. “The United States faces a serious and growing threat from antisemitic foreign terrorist organizations (FTOs), homegrown violent extremists (HVEs), and domestic violent extremists (DVEs). In 2019, New Jersey saw antisemitic, anti-police domestic terrorists attack a Kosher supermarket, massacring four people, including three police officers. In 2018, eleven people were murdered at a Pittsburgh synagogue by a domestic terrorist. In both cases, the fatalities would have been much higher if our brave law enforcement officers had not shot the assailants, killing one and incapacitating the other.

“These were not random occurrences. According to the Anti-Defamation League’s (ADL) 2021 Audit of Antisemitic Incidents, the overall number of incidents in the U.S. increased by thirtyfour percent from 2020 and was the highest year on record since ADL began tracking them in1979. The U.S. House of Representatives has clearly expressed in H.Res.246 its opposition to the global Boycott, Divestment, and Sanctions Movement (BDS Movement) targeting Israel and the hatred that it inspires,” the House members continued.

“We are pleased that the FBI is already tracking developments, and ask that you please work with partners across the country – including law enforcement at the federal, state, local, tribal, and territorial levels, as well as with partners in faith-based communities and the private sector – to protect those people and entities highlighted for targeting by the Mapping Project. We ask that you work with state and local law enforcement to apprehend any FTOs, HVEs, or DVEs that you determine are planning to use this map as a roadmap to domestic terror or violence,” they wrote in conclusion.

“We are deeply concerned over the targeting of the Jewish community in Massachusetts by the Mapping Project and find it troubling that this implicit antisemitic attack directed towards our Jewish brothers and sisters has been allowed to happen,” they said in a joint statement. “The Mapping Project has explicitly stated that the intention of its collective mapping is to reveal local Jewish entities and networks to specifically dismantle and disrupt them. We have witnessed far too many hate-based attacks on places of worship, businesses, schools, and public facilities, to wait silently for the next incident to take place. Antisemitic attacks have risen by 42 percent in Massachusetts while nationwide there has been a 34 percent uptick. As members of the Latino Jewish Caucus, we stand united with the Jewish community in our response to condemn this hate and xenophobic actions that provoke antisemitism, hate motivation, or incitement of violence,” the caucus members continued.

“The recent surge in racist and xenophobic incidents in the United States and globally demands advocacy and engagement from civic and faith leaders to denounce all forms of violent xenophobic acts, attitudes, and expressions that serve to alienate or endanger any group of people. These attitudes should never be tolerated and have no place in our society today. We vow to continue to utilize all resources at our disposal, including increased security for those communities vulnerable to hate crimes, enhanced coordination among security and intelligence agencies, and the development of a national strategy to combat this scourge,” they said in conclusion.

The Latino Jewish Caucus defines itself as focusing on the “critical work fostering close collaboration between the U.S. Latino and Jewish communities, fighting the uptick in antisemitism and other forms of hate while strengthening trilateral ties among the U.S., Latin America and Israel based on shared histories, values, and interests.”