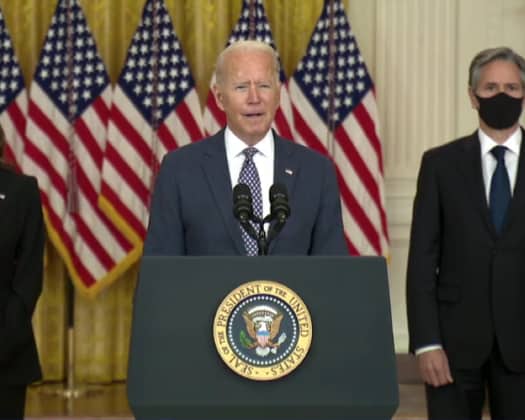 “President Joseph R. Biden has abdicated his responsibility and duties entrusted to him as president of the United States. This blatant abdication of his office is grounds for President Biden to resign immediately,” Donalds said.

“It has become clear that President Biden has lost complete and total confidence of the American people through his haphazard decision to withdraw from Afghanistan,” Donalds insisted. “This botched withdrawal is currently threatening the lives of our servicemen and women, the stability in the region, and our integrity on the global stage.

“As commander-in-chief, Biden is directly responsible for commanding our brave troops with a coherent, strategically intelligent, and sound operation that keeps our Armed Services, citizens, and allied partners out of harm’s way. He has failed on all fronts,” Donalds continued.

“As an elected member of the United States House of Representatives, I swore an oath to protect our Constitution, and I take that solemn responsibility with the utmost seriousness. In good faith, I cannot look my constituents in the eye, many of whom are veterans, and tell them that the president of the United States can perform the duties entrusted to him by the Constitution. Calling on the leader of the free world to resign his office immediately weighs heavy on my heart, but this must happen to restore American’s safety both at home and abroad, our honor, and faith in the chief executive to faithfully execute the duties of the presidency,” Donalds concluded. “President Joseph R. Biden must resign immediately.”