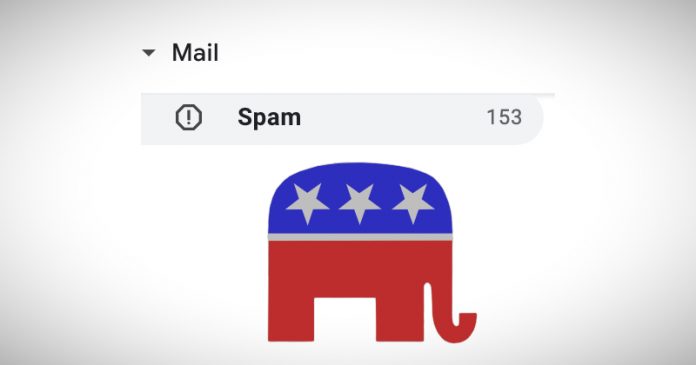 A congressman from Florida is pushing U.S. Sen. John Thune’s, R-SD, and U.S. Rep. Debbie Lesko’s , R-Ariz., proposal to “ban large email platforms, such as Gmail, Outlook, and Yahoo Mail, from using filtering algorithms that automatically label emails from political campaigns as spam, unless users choose to apply the labels themselves” and “require more transparency from such Big Tech companies on the sorting practices they use to filter emails.”

Thune introduced the “Political Bias in Algorithm Sorting (BIAS) Emails Act” with the support of the GOP leadership in the Senate, including U.S. Senate Minority Leader Mitch McConnell, R-Ky. More than two dozen Republican senators lined up behind the proposal as co-sponsors including U.S. Sens. Marco Rubio, R-Fla., and Rick Scott, R-Fla.

“I’ve long believed that Congress should hold Big Tech accountable to the users who rely on its platforms – for everything from email to social media – and empower those consumers to make their own online decisions, free from Big Tech’s heavy hand,” Thune said when he unveiled the proposal “I’m proud to lead this effort that would prohibit large online platforms from censoring emails through filtered algorithms – a process that ultimately discriminates against political campaigns. Consumers should be able to choose what they want to see, not Google. It’s long past time for Big Tech to be held accountable for its blatant bias, and this bill would be an important step in that direction.”

“The evidence suggests that some actors in the tech industry display an undeniable pattern of ideological bias against conservatives,” said McConnell. “I applaud Senator Thune for leading legislation to push back against companies that use private-sector political censorship to quietly distort our public discourse. If left-wing elites disagree with citizens’ free speech, they should make their own case in an open marketplace of ideas, not use powerful technology platforms to put a thumb on the scale.”

“Republicans won’t sit back and allow Big Tech to be a pawn for the Left,” said Scott. “Any suppression of conservative candidates is unacceptable. The Political BIAS Emails Act is an important step forward to hold Big Tech accountable for its attempts to silence conservative voices and increase transparency between large email platforms and political campaigns.”

“It’s time to hold Big Tech accountable for its shameless partisan censorship,” Rubio said. “This bill would empower users to have more control over their email inbox preferences and expose the filtering practices of these large platforms.”

Last week, Lesko brought out the House companion with U.S. Rep. Gus Bilirakis, R-Fla., as one of the seven co-sponsors, all of whom are Republicans, including U.S. House Minority Leader Kevin McCarthy, R-Calif.

Consumers deserve transparency in understanding how Big Tech is manipulating the information they are able to access,” said Bilirakis. “This bill ensures transparency and cracks down on censorship based on political beliefs.”

“Today’s Big Tech behemoths were once the gold standard of entrepreneurism and innovation, and offered space for the First Amendment to live freely,” said McCarthy. “But over the years, these platforms abandoned these First Amendment principles and have instead chosen to use their immense power to pick a side in our country’s political discourse.

With Democrats controlling both chambers of Congress, the measure is not expected to pass.