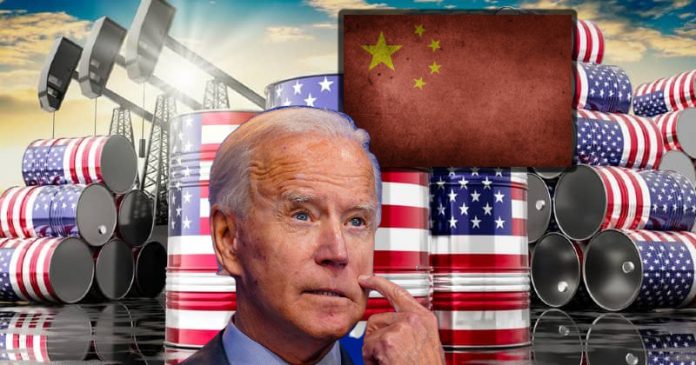 The letter comes during Biden’s trip to the Middle East, where he plans to meet with the Kingdom of Saudi Arabia and other OPEC+ nations.

We write to express concern regarding your upcoming visit to the Middle East, where it is reported that you intend to ask the Kingdom of Saudi Arabia and other OPEC+ nations to expo1t more oil to the United States. This confusing display of weakness is astounding considering that, just a few short years ago, the U.S. was producing more oil and natural gas than any country in the world. We were not reliant on cartels and despots to secure our energy future – we were energy dominant. Actions taken by your administration, however, have undermined our position of prominence, once again forced the American people to rely on authoritarian regimes, and contributed to record-breaking prices hardworking families face at the pump today.

With each passing day, your administration takes actions that directly hinder our ability to tap our plentiful natural resources, which empowers our geopolitical adversaries and harms hardworking middle-class Americans. The energy prices being paid by our constituents at the gas pump are astounding, with the national average for a gallon of gas having exceeded $5.00, the highest in U.S. history. Gas prices have gone up nearly every month since you took office, and according to the U.S. Bureau of Labor Statistics’ Consumer Price Index (CPI), energy costs have increased 34.6 percent over the past year.

To address rising costs, House Republicans have introduced many pieces of legislation that would increase our energy production and provide regulatory certainty that businesses need. These include the American Energy Independence from Russia Act, which would reauthorize the Keystone XL Pipeline, prohibit the cancellation of lease sales without congressional approval, and require congressional approval for withdrawing any federal lands from mineral development. In addition, the bill requires you (or “your administration”) to create an energy security plan that analyzes current energy production and imports while making proposals on how to increase domestic energy production.

Republican members have also introduced legislation that will address the permitting backlog on federal lands and modernize our nation’s project delivery system. You and other members of your administration have made a habit of repeating the falsehood that energy producers are exacerbating energy costs by “sitting on 9,000 unused permits.” This notion willfully neglects the fact that most of these 9,000 permits are currently unusable because they cannot be developed until your administration approves other necessary permits and tights of way. Many of these needed permits and tights of way are currently sitting in Bureau of Land Management field offices or at the Department of the Interior in Washington, D.C. waiting for approval. This is inexcusable, as producers are waiting over 400 days for a federal permit to be approved, which. Has a direct impact on production.

As part of this challenge, energy producers are having difficulties getting their product to market due to the lack of pipeline permit approvals by your administration. This is extremely hypocritical, given your administration’s green lighting of the Nord Stream 2 pipeline, which would transport Russian natural gas to countries in Central Europe. The approval of Nord Stream 2 emboldened Russia in the lead up to its brutal invasion of Ukraine earlier this year and weakened the energy security of our European allies. We can counter Russian aggression by expediting approval processes for domestic pipelines and exporting more U.S. natural gas to our allies and partners across the world, but you have been reluctant to do so.

Your administration is also not adhering to its legal mandates required by the Outer Continental Shelf Lands Act by failing to ensure there is no lapse in the 5-year leasing plan that is required in order to offer areas for offshore energy production. This is in addition to not issuing any new leases and cancelling lease sales for offshore oil and natural gas development, decisions that will directly contribute to the lack of revenue available for coastal restoration, species conservation, and rising energy costs for our constituents. Republican members have again offered legislative proposals in good faith to address this issue, but they have been met with silence from your administration.

All these legislative efforts are greatly influenced by the feedback we have received from our constituents in energy producing communities. Both onshore and offshore, Arne1ica has the resources to control our own energy security to help lower prices. It is time that your administration recognizes this and rolls back the destructive actions it has already taken before this crisis gets even worse.

For these reasons, instead of flying thousands of miles to the Kingdom of Saudi Arabia to ask a foreign nation for their energy resources, we invite you to travel to energy producing communities in our districts and meet with our constituents. These are the people who brought us energy abundance and dominance, and who are tasked with living and operating under the policy choices your administration has made. Their feedback can guide our nation out of the catastrophic mess we currently are facing.

The status quo of increased energy costs for American families and increased dependence on foreign nations does not have to be the new normal. We can once again be energy dominant, supplying our nation with the resources that ensure our energy and national security, and allow us to share our abundant resources with our partners and allies around the world, while helping to lower costs for the American people. Informed by the experiences of our constituents, we are committed to working with you to enact legislation that unleashes the bountiful resources of our great country.