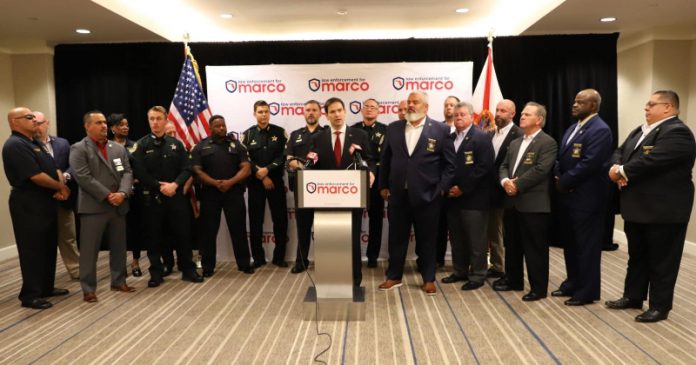 The Florida Fraternal Order of Police (FOP) announced at the end of last week that it will back U.S. Sen. Marco Rubio, R-Fla., for a third term

“This endorsement was a unanimous vote of our members present at our state conference this year,” said Steve Zona,. “Val Demings’ positions change as much as the wind direction changes, while Senator Rubio stands like an oak tree. Val Demings abandoned law enforcement when we needed her most.”

“I want to begin by thanking all of you. Thanking you for your service to our country, to our communities, and for this endorsement. It’s a tremendous honor,” Rubio said. “This country is going through a historic crime wave… And the ones who pay the price for these stupid laws and crazy decisions are the people wearing the uniform. As long as I’m a U.S. senator, I will always be strong on the side of the men and women in uniform that keep us safe.”

“This is about simple fairness. Our law enforcement officers who work overtime without pay should be fairly compensated in their retirement for the real amount of service that they performed. As a 27-year law enforcement officer, I am proud to join with Congressman Pascrell to introduce this legislation that honors our officers and corrects a current injustice,” she said.