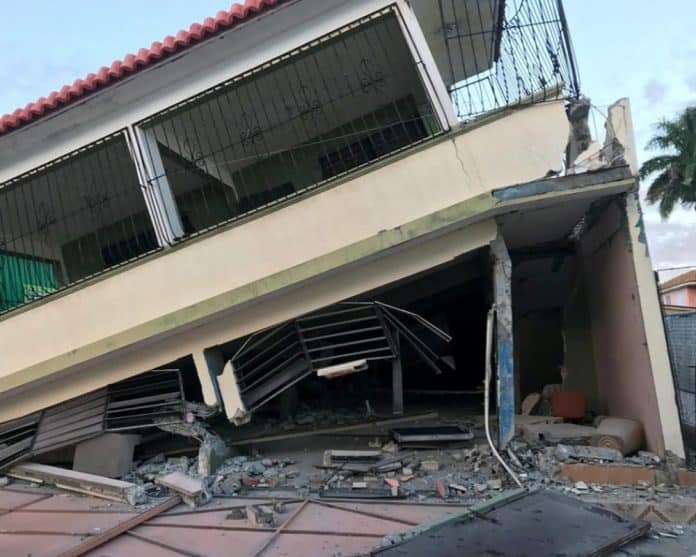 Members of the Florida delegation in the U.S. House are focused on Puerto Rico after recent earthquakes hit the island, calling for more federal aid.

“Following January 7th’s earthquake, the Costa Sur power plant, which is one of the island’s largest plants, suffered extensive damage. As aftershocks risk further damage to the plant’s infrastructure, the island will need emergency generation of 500 MW for at least the rest of this year,” Soto’s office noted.

Soto, the first Florida congressman of Puerto Rican descent, weighed in on the letter this week, noting that he visited the island earlier in the month.

“This weekend, I saw firsthand the terrible toll these continuing earthquakes are taking upon hundreds of thousands of Puerto Ricans,” said Soto. “Countless of our fellow Americans are without power, and strong aftershocks, like the one I experienced on Saturday, have made restoration even more difficult for the island. It’s time for President Trump and his administration to put an end to their personal vendetta against Puerto Rico and use all available resources to help the island rebuild.”

“I am proud to join my colleagues today in calling on FEMA to use all resources necessary to restore power to Puerto Rico in the wake of recent earthquakes,” said Ocasio-Cortez. “At every turn, the federal government has failed to adequately respond to natural disasters in Puerto Rico, leaving thousands without access to basic necessities. Vulnerable communities should not go without power any longer.”

“The federal government must not abandon the people of Puerto Rico again. I urge FEMA to act quickly and do everything in its power the help the island. I also urge once again the Trump Administration to issue a major disaster declaration to help expedite their efforts,” said Serrano.

“We must do everything we can to help our fellow American citizens of Puerto Rico during these trying times,” said Mucarsel-Powell. “The continued earthquakes and aftershocks have left many without power. The federal government must ensure that Puerto Rico has all the necessary resources to respond and to begin recovery as soon as possible.”

“We write to request that FEMA use all available resources to help restore power and power capacity to Puerto Rico following the destructive earthquakes that struck the island over the past two weeks,” Soto and the other House members wrote. “On January 7, the island experienced the worst earthquake in more than a century when a 6.4-magnitude quake struck, killing one person, injuring at least nine and causing a major power outage. The Costa Sur power plant, which is one of the island’s largest plants and produces a quarter of the island’s electricity, suffered the most damage.

“On January 11, a large aftershock of magnitude 5.9 occurred. Strong aftershocks can complicate efforts to restore power, as each aftershock risks further damage to the plant’s infrastructure and mandates that personnel working to restore the plant evacuate for their safety. Current USGS forecasts indicate a 55 percent probability of a magnitude 5 earthquake in the next seven days, potentially causing more damage,” Soto added. “While PREPA officials report that power has been restored to more than 99 percent of customers, because of the damage at Costa Sur, the island will still need emergency generation of 500 MW for at least the rest of this year. Without this generator, which would provide extra resource capacity, the Costa Sur plant would run without backup. As a result, any pauses for maintenance or unexpected interruptions over the course of repair would leave those served by the plant without power.

“Thank you for your attention to this important request. We are aware that FEMA and PREPA are coordinating on this issue, and we hope that FEMA and its other federal partners will work to ensure that Puerto Rico receives all appropriate resources and assistance that it deserves,” they wrote in conclusion.

“I saw firsthand the terrible toll these continuing earthquakes are taking upon thousands of Puerto Ricans. In places like Ponce, Peñuelas, Guayanilla, and Guánica, our fellow Americans have no rest from the onslaught of tremors. Many have moved to refugee camps because homes, apartments, schools and other buildings remain unstable,” Soto said. “It’s time for President Trump’s administration to approve a Major Emergency Declaration and finally stop holding Hurricane Maria relief funding hostage. Congress also needs to pass earthquake disaster relief to provide emergency housing and health services, as well as to help rebuild local schools, homes and the Costa Sur power plant.”

More members of the Florida delegation will be hitting Puerto Rico in the days to come as U.S. Rep.  Jenniffer González-Colón, R-PR, will be joined by U.S. Reps. Stephanie Murphy, D-Fla., Bill Posey, R-Fla., and Donna Shalala, D-Fla., in touring the island.

“From Hurricane Maria to these recent earthquakes, our fellow Americans in Puerto Rico have been strong and resilient in the face of adversity. They need to know that the federal government has their back,” said Murphy on Thursday. “As someone who represents more individuals of Puerto Rican heritage than nearly any other member of Congress, and who believes in true equality for Puerto Rico, I want to make sure that the island is swiftly receiving all of the resources it needs.”

“It’s imperative to bring my Congressional colleagues to see first-hand the impact and continuing needs of their fellow American citizens in the island in order to expedite the resources for Puerto Rico’s recovery. For the same reasons that over 100 Members from both sides of the aisle needed to visit us in the aftermath of Hurricane Maria, it is imperative now for me to go beyond words and bring them here to see and hear what people are going through,” said González-Colón. “I thank Representatives Murphy, Shalala and Posey for always supporting Puerto Rico, not only following these ongoing earthquakes and aftershocks, but each and every time we have called upon them.”

“The earthquakes that recently struck Puerto Rico are the latest of many challenges the island has faced in recent years,” said Shalala. “Throughout these difficult times, our brothers and sisters in Puerto Rico have often been treated as second-class citizens. That is unacceptable. I’m traveling to the affected areas to find out how Congress can help to make sure these communities can begin rebuilding their lives as soon as possible.”

“It’s important to see first-hand how recovery efforts are going so Congress knows how best to assist the government of Puerto Rico in their recovery efforts,” said Posey. “The earthquake complicates the road to recovery from last season’s hurricanes. I know that many friends and family on the mainland are already providing assistance and want to do more. That is encouraging and we hope that our visit will reassure those in Puerto Rico that we are full partners in their recovery.”