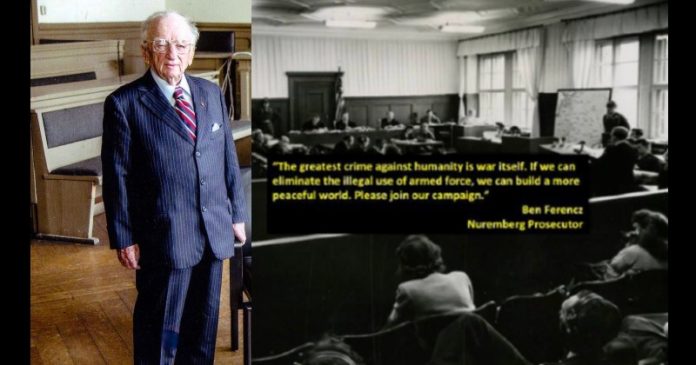 “During World War II, Ferencz served in the U.S. Army and helped collect evidence of Nazi war crimes. After the war, he was honorably discharged with the rank of Sergeant of Infantry and was awarded five medals for his service. Later, he was appointed Chief Prosecutor in the trial that convicted 22 former Nazi Schutzstaffel (SS) officials for their roles in the murder of over a million people,” Frankel’s office noted when she introduced the resolution in November. “Over the course of his life, Ferencz has been a tireless advocate for the rule of law and international justice. This remarkable centenarian embodies the best of what the United States—and the American people—offer to the world.”

The resolution cleared the House on a voice vote last week.

“It is an honor to recognize the last living Nuremberg prosecutor, 102-year-old Benjamin Ferencz, with the Congressional Gold Medal—Congress’s highest expression of civilian appreciation. Mr. Ferencz’s lifelong commitment to justice, peace, and human dignity is an inspiration to all who value freedom and humanity,” said Frankel. “Now, the U.S. Senate must get this bipartisan bill over the finish line so that we can give Mr. Ferencz the recognition he deserves.”

“The Congressional Gold Medal is the highest expression of national appreciation for distinguished achievements and contributions. Certainly Ben Ferencz, who has spent more than 50 years prosecuting war crimes and genocide, qualifies for this prestigious honor. Throughout history, humanity has encountered many faces of evil. Our brightest moments as an international community have been those in which we present a united front in our efforts to identify and eradicate its presence. Mr. Ferencz has been at the helm leading that important work, and I am humbled to help honor him,” said Bilirakis.

“The Nuremberg Trials, the first international war crimes tribunal in human history, was a monumental milestone for the international community—a step toward true accountability for those who committed crimes against humanity during World War II. Ben Ferencz, who spent more than 50 years prosecuting the most horrific war crimes, is a living embodiment of the Nuremberg legacy,” said Deutch. “Mr. Ferencz’s lifetime of work carries particular significance today. At a time when there are fewer and fewer Holocaust survivors to share their experiences, Mr. Ferencz, the last remaining prosecutor from this tribunal, is a shining example to us all of the continued importance of speaking out, showing zero tolerance for war crimes, and ensuring what happened during the Holocaust never happens again. In honoring him, we commit to continuing his efforts.”

The resolution now heads to the U.S. Senate.