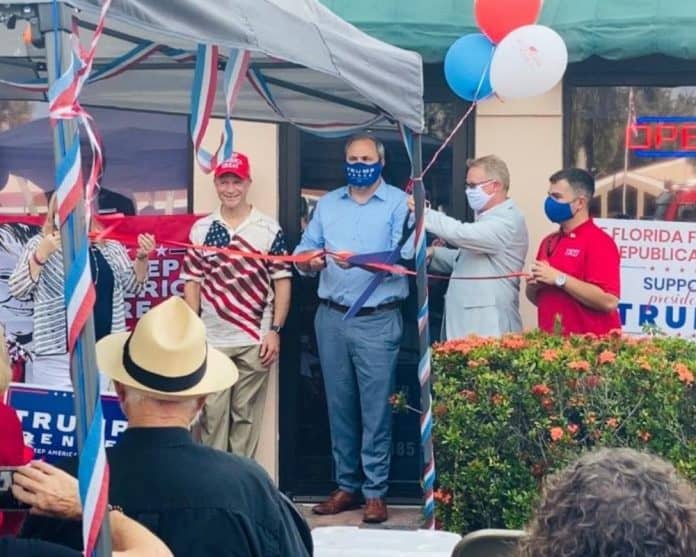 The Republican Party of Florida (RPOF) plans to put boots on the ground in advance of November’s election despite the continued coronavirus pandemic.

State Sen. Joe Gruters, R-Sarasota, the chairman of the RPOF, offered some insights on the GOP’s strategy as it tries to keep Florida in President Donald Trump’s column.

“Everything for us depends on Florida,” Gruters said. “That’s why you’ve seen so many visits by the president and the vice president who will be in town this week.”

Gruters was on hand for the opening of the Collier County GOP office. Focusing on Southwest Florida is a large part of the plan to keep the Sunshine State red.

“Collier County is one of our home bases so to say, and we really need to counter Southeast Florida and what they can deliver for the Democrats,” Gruters said. “We need to deliver Collier, Lee, Charlotte, all the way up to Sarasota big for the president.”

The RPOF and the Trump campaign already have 180 staffers on the ground across the state. Gruters called that a marked improvement from the last time around.

“To put it in perspective, in the 2016 campaign, at the very peak where I served as the co-chairman for Florida, we had 62 staffers,” he said.

While the RPOF is touting 12 million voter contacts since the pandemic began, some of those efforts may or may not have reached the mark. The real key according to Gruters is old school campaigning at its most basic: getting out and walking precincts.

“We are going to be out there every Saturday across the state,” Gruters told Florida Daily.

Republicans are going all-in on this strategy.

“A lot of people are scared to walk door to door or scared to do campaign work. There’s nothing that can take the place of what I would say is the basic blocking and tackling of a campaign and that’s person to person contact. You can still do this by following the CDC guidelines,” Gruters said.

Gruters has already hit walked the streets, including in the Tampa area. He and the volunteers doing canvassing simply ring doorbells and then step back to at least six feet away while wearing masks. He said what he has seen on the campaign trail has been eye-opening, especially the fervor on both sides.

“It’s unlike anything I’ve ever seen, the people that want him to succeed and do well,” Gruters said about Trump. “But on the opposite end, I walked to some doors where I’ve been cursed at and told to get off the property.

“It seems like the other side, there is so much hatred for the president. It’s like it’s oozing out of them and there’s no tolerance. We just have to for the greater good, do everything we can to help the president and try to unite the country, and push the policies that make America great, and that is freedom and liberty,” he added.

Gruters said this will not be a persuasion election. He believes, for the most part, voters have already made up their minds. Gruters insisted this will be a turnout election–and the GOP has to do everything they can to get their voters to the polls.

Val Demings Gets Two Bills Through the Homeland Security Committee