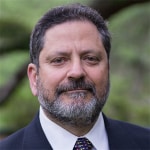 (From FloridaTaxWatch.org) – Dominic M. Calabro has led Florida TaxWatch as President & CEO for nearly its entire 41-year existence, after joining its research staff in 1980. Under Calabro’s leadership, Florida TaxWatch has earned and maintained the respect of the state’s most highly regarded and influential leaders, and has earned the credibility and respect of the citizens of Florida as well as the highly independent state and national media.

Over his 41 years at the helm of TaxWatch, Calabro has been appointed to numerous task forces and study groups by every Governor going back to Governor Bob Graham. Governor Rick Scott more recently named Calabro as the Chairman of the Florida Commission on Review of Taxpayer Funded Hospital Districts, and a member of the constitutionally chartered Government Efficiency Task Force. He has been named one of the nation’s “Ten Outstanding Young Americans” by the U.S. Junior Chamber of Commerce, “Executive of the Year” by the Florida Society of Association Executives, a “Must-Know Floridian” by Florida Trend magazine, and one of Florida Trend’s “500 Most Influential Business Leaders”, for each of the last three years.

Dominic is an “almost native” Floridian, having moved to South Florida from New York at the age of eleven. After attending Catholic school, including four years at Catholic Seminary, he graduated with high honors from Broward Community College, where he received Broward Community College’s Distinguished Alumni Award. Dominic later received his Bachelor’s degree with highest honors from Florida International University. He also holds a Master’s degree in Social Work from Florida State University and will soon receive a second Master’s degree in Public Administration, public finance, and budgeting from FSU.

Dominic and his wife Debbie reside in Tallahassee and have four adult children.