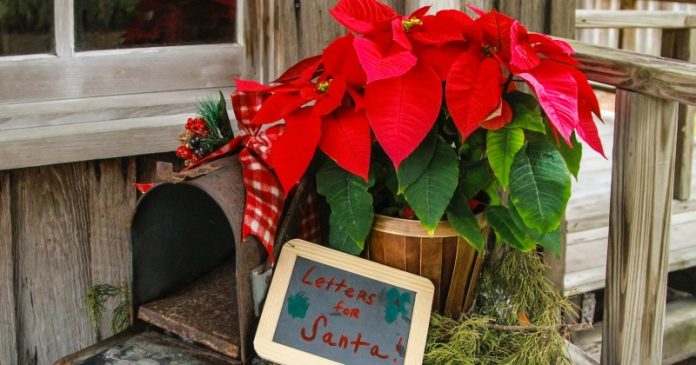 While it ranks as a holiday staple, the poinsettia has only been popular in Europe and the United States for around 200 years–thanks largely to Joel Poinsett.

While Poinsett has largely been forgotten, voters in Jacksonian America would have been familiar with him. Born in Charleston, South Carolina in 1779 to a wealthy family, Poinsett abandoned plans to serve in the military or go into law to travel throughout Europe, the Middle East and Asia and dabbling in diplomacy. Poinsett spent years abroad, meeting some of the most prominent leaders of the Napoleonic era, including Tsar Alexander I. An accomplished writer and horticulturist, Poinsett offered memorable accounts of his travels and shrewd insights into a dramatic period of world history.

When he returned to the United States, Poinsett earned the notice of President James Madison, who tapped him in 1810 to serve as a diplomat in South America. Serving in Chile and Argentina, Poinsett worked to improve trade even as those nations overthrew the Spanish governments. Returning to South Carolina in 1815, Poinsett turned his attention to local politics, winning a seat in the state legislature and declining offers from the Monroe administration to serve as a diplomat in South America. Elected to Congress in 1820, sitting on the Foreign Affairs Committee, Poinsett eventually agreed to take part in a mission to Mexico, reporting to the Monroe administration on Agustín de Iturbide’s brief and stormy tenure as emperor of that nation. A few years later, when President John Quincy Adams searched for the first minister to the fledgling Mexican republic, he eventually turned to Poinsett after several other political leaders, including Andrew Jackson, declined the post.

Poinsett was a very active diplomat in Mexico and he couldn’t stay out of that nation’s politics, leading to him becoming increasingly unpopular in that nation. There were some triumphs for Poinsett–including getting the Treaty of Limits signed in 1828–but his efforts to purchase land from the new nation failed. More famously, Poinsett’s background in horticulture led to the popularity of the plant that bears his name. In 1828, while traveling in Taxco, Poinsett stumbled across the red flowering plant and sent samples home back to the United States. A decade later, the plant was increasingly popular in the United States, with Americans calling it the “poinsettia” after the diplomat who popularized it.

With South Carolina torn over nullification and the tariff, Poinsett returned home, where he allied with now President Andrew Jackson. Poinsett led Unionists in South Carolina against John C. Calhoun and the Nullifiers. While Calhoun won at the state level, Poinsett emerged as a favorite of national Democrats. When fellow Jackson ally Martin Van Buren was elected president in 1836, he tapped Poinsett to lead the War Department.

Poinsett headed the War Department for much of the Second Seminole War. Under his tenure, American forces embraced far harsher tactics against the Seminoles, including seizing tribal leaders, such as Osceola, under flags of truce. American forces led by Zachary Taylor and Thomas Jessup won military victories over the Seminoles, including at the battle of Lake Okeechobee. As the war continued to sputter, thanks to a series of broken and rejected truces, Poinsett oversaw new tactics, though, after Van Buren was defeated for reelection, the war was still ongoing when the South Carolinian left the War Department in 1841.

Now in his 60s, Poinsett spent the last decade of his life on the political sidelines. He died of tuberculosis in 1851, with his brand of Unionism largely forgotten in South Carolina. While the likes of Calhoun argued that slavery was a positive good, despite owning slaves himself, Poinsett continued to echo the rhetoric of the Founding Fathers, calling for gradual emancipation. Once out of office, Poinsett, who had used his perch at the War Department to support expeditions to discover more about the world, led the National Institute for the Promotion of Science which became part of the Smithsonian in the 1850s.

Whatever his merits as a leader, Poinsett remains far better known for bringing a favorite Christmas plant to the United States than any of his political efforts. But he hasn’t been totally forgotten in Florida, the territory which consumed much of his attention during his four years at the War Department. Lake Poinsett covers more than 4,000 acres in Central Florida, spanning three counties, a tribute to one of the more interesting politicians of the antebellum period.

Kevin Derby wrote his senior thesis at Trinity College on John C. Calhoun’s leadership of the War Department during the Monroe administration and his master’s thesis at Excelsior College on Edmund Ruffin, a 19th-century American soil chemist, defender of slavery and agricultural reformer who helped lead the South to form the Confederacy. He’s currently finishing up his dissertation at the University of the Cumberlands, looking at Gen. John Pope and the change process during the Civil War. Kevin teaches leadership and writing at Divine Mercy University.