Comcast announced an opening date for Epic Universe, the next major theme park for Universal Orlando Resort. During Comcast’s third-quarter earnings call, executives said Epic Universe is set to open in the year 2023.

While none of the rides or attractions have been disclosed, executives on the call said that the new park will feature multiple themed lands.

Universal Orlando’s expansion led to many predictions about potential rides within the approximately 700 acres of land off of Universal Boulevard, just south of Sand Lake Road. Comcast’s announcement for Epic Universe came on the heels of recent announcements of new roller coasters at Sea World and Busch Gardens and a new Star Wars ride scheduled to open in early 2020 at Walt Disney World.

Star Wars Galaxy’s Edge may propel Disney to new milestones by the end of this year. Florida’s tourism industry hopes to see positive momentum continue from 2018, when a record 75 million people visited Orlando, making it the most-visited destination in the United States. 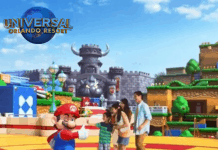 Ashley Moody Joins Other AGs, Telephone Companies in Cracking Down on Robocalls