Florida’s two U.S. senators reached out to the chairwoman of the National Endowment of the Arts (NEA), wondering why federal funds were used to support exhibits shown at Duke University’s Nasher Museum of Art and Northwestern University’s Block Museum of Art which included portraits of Communist revolutionary Ché Guevara.

We write with great concern regarding a federal grant awarded to the McNay Art Museum in San Antonio, TX, where an exhibition titled Pop América 1965-1975 features portraits paying homage to Ernesto “Ché” Guevara. The exhibit has subsequently traveled to the Nasher Museum of Art at Duke University as well as Northwestern University’s Block Museum of Art. A description of the exhibit on Duke’s Nasher Museum website claims that these works demonstrate “bold contributions” to “social protest, justice movements and debates about freedom.” This statement is either blithely ignorant or deliberately deceptive, given the exhibition’s inclusion of propaganda celebrating a thug who mercilessly silenced his opponents with bullets.

Ché Guevara was an Argentine revolutionary who was involved in the Cuban Revolution that was led by Fidel and Raul Castro from 1953 to 1959. It is disturbing that U.S. taxpayer dollars are being used to fund an exhibition that glorifies an individual who hated the United States, our commitment to democratic principles, and the values of individual freedom that we so deeply cherish. Those who choose to praise Guevara fundamentally ignore his role in the mass murder of innocent lives during the Cuban Revolution, as well as those who were denied the right to due process. His contempt for democracy, freedom of press, and LGBTQ individuals has been well documented. Humberto Fontova, author of Exposing the Real Ché Guevara, wrote: “The regime that Ché Guevara co-founded is the only one in modern history in the Western Hemisphere to have herded gays into forced labor camps.”

We cannot help but think of the painful memories of many in the Cuban exile community who witnessed or learned of the news that their loved ones were killed by the actions or direct orders of Ché Guevara. He brazenly admitted to the atrocities that he ordered during a visit to the United Nations on December 11, 1964, when he publicly declared after a speech: “Executions? Yes, we have executed, we are executing, and we will continue to execute.” Maria Werlau, the author of Ché Guevara’s Forgotten Victims  who spent years documenting the people killed under his orders, wrote: “He was directly responsible for at least 124 killings.”

Executions were not Guevara’s only “bold contribution” to the Cuban Revolution. His desire to eliminate democratic practices and values expanded further to his blatant disregard for human rights and human dignity. In 1959, he told journalist José Pardo Llada: “We must eliminate all newspapers; we cannot make a revolution with free press. Newspapers are instruments of the oligarchy.” In 1961, he founded Cuba’s first forced labor camp to “re-educate” people who had committed “crimes against revolutionary morals,” including LGBTQ individuals, people practicing their religion, and others who opposed him.

Guevara was a sadistic butcher who murdered and tortured innocent people. We do not believe that U.S. taxpayer dollars that appropriated by Congress to the National Endowment of the Arts should be used to glorify or romanticize an individual who so openly disdained American principles and fundamental rights and freedoms. Guevara’s very image is deeply offensive to many Cuban-Americans and other freedom-loving people around the world.

Therefore, we respectfully request you clarify how your agency evaluated the appropriateness of content featured in an exhibit that was partly funded by U.S. taxpayer dollars. A contextualization of the works in question would have provided an important opportunity for education and reflection, and yet a factual history of Ché Guevara’s bloody legacy are not included in the program. We would also like to know what guidelines, if any, are in place to guide and oversee the decision-making process in the future. Lastly, we urge you to ensure that individuals responsible for war crimes or crimes against humanity are not featured in any NEA funded exhibits without clearly and unambiguously highlighting their heinous crimes and memorializing their victims.

We look forward to your response. 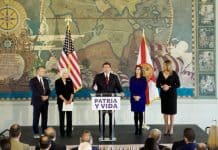