Florida’s two U.S. senators–Republicans Marco Rubio and Rick Scott–are championing a proposal “to make it easier for faith-based organizations to apply for, and receive, government grants and other types of funding without fear of arbitrary religious limitations and vindictive litigation.”

Rubio introduced the “Lifting Local Communities Act” with Scott as a co-sponsor. Other co-sponsors include Republican U.S. Sens. Josh Hawley of Missouri, Cindy Hyde-Smith of Mississippi, Jim Inhofe and James Lankford of Oklahoma and Tim Scott of South Carolina.

“During my years as both Governor and Florida’s U.S. senator, I’ve seen the incredible positive impact that faith-based groups and charities have on Florida’s families and communities in times of need. These groups deserve more of our support, not less. The Lifting Local Communities Act ensures that federal grant programs respect the First Amendment and do not unfairly discriminate against religious groups that dedicate themselves to serving others,” said Rick Scott.

CatholicVote, the First Liberty Institute, the Faith & Freedom Coalition, Heritage Action and the Family Research Council all support the proposal.

Rubio’s bill was sent to the U.S. Senate Finance Committee. So far there is no companion measure over in the U.S. House. 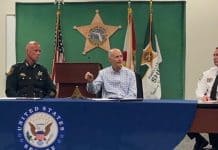