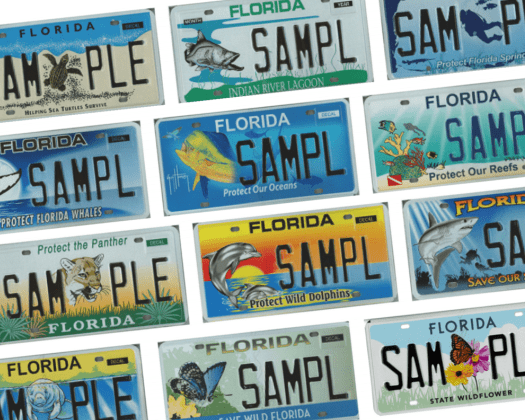 Bean weighed in on the bill being signed into law on Monday.

“The bill not only brings meaningful reform to specialty license plates, it will raise millions of dollars for various charities all over Florida,” said Bean. “The signing of the bill is the prized reward of multiple legislative sessions of hard work and careful agreements that finally culminated in unanimous ‘yes’ votes on both the Florida Senate and House floors.

“This all began a few years ago with a desire to add a Ducks Unlimited plate, but it soon grew to include the ideas of multiple legislators and organizations that have waited many years to see a plate added, that for them was meaningful enough to put on their vehicles,” Bean added.

Bean’s office offered some insights on the new plates which cover a wide array of themes.

“This bill adds 32 new specialty license plates, such as America the Beautiful, Florida Stands with Israel, Walt Disney World, University of Georgia, University of Auburn, University of Alabama, Ducks Unlimited, Daughters of the American Revolution and many more. A process to discontinue lower-performing plates and replace them was included, while increasing the cap on specialty plates to 150. Also contained in the legislation is a requirement that 90 percent of proceeds go directly to charitable organizations,” Bean’s office noted.

The new plates will cost $25 and include one supporting the Florida Guardian ad Litem (GAL) Program.

“It gives visibility to our mission and our cause,” said Guardian ad Litem Foundation CEO Sonia Valladares. “It’s an opportunity to promote our mission on vehicles all across the state.”