With more than 2 million Floridians planning to travel over Memorial Day weekend–1.9 million of them by road–gas prices slipped slightly in the past week.

This week began with the average gallon of gas in Florida costing $2.87, down from $2.89 at the start of last week and below the national average of $3.04.

“Unless pump prices suddenly rise this week, holiday travelers will find gas prices that are slightly below what they paid on Memorial Day 2018,” said Mark Jenkins, a spokesman for AAA and the Auto Club Group. “While expectations of strong holiday fuel demand can carry the potential for causing higher pump prices, wholesale gasoline prices dropped 5 cents last week. That means gas prices could drift lower as the weekend approaches, but things can change quickly in the fuel market.”

Panama City had the most expensive gas in the state at the start of the week with an average of $3.05 a gallon followed by the Walton Beach-Boca Raton area at $3.01 a gallon and Tallahassee at $2.99 a gallon.

At the start of this week, Punta Gorda had the least expensive gas in the state with an average of $2.79 a gallon followed by Orlando at $2.81 a gallon and Jacksonville and the Tampa Bay area which both saw an average of $2.82 a gallon. 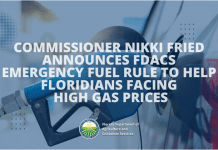