The bill would end the “United Nations Independent International Commission of Inquiry on the Occupied Palestinian Territory, including East Jerusalem and Israel and combats systemic anti-Israel bias at the UN Human Rights Council.”

Steube weighed in at the end of last week on why he introduced the boll.

“Once again, the UN Human Rights Council continues its practice of singling out democratic ally Israel in its unfair and indefinite Commission of Inquiry. This one-sided “investigation” impedes progress toward peace and prosperity in the region, and costs US taxpayers money. I am grateful to join my colleagues in calling for its abolishment,” said Wilson. 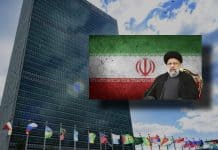