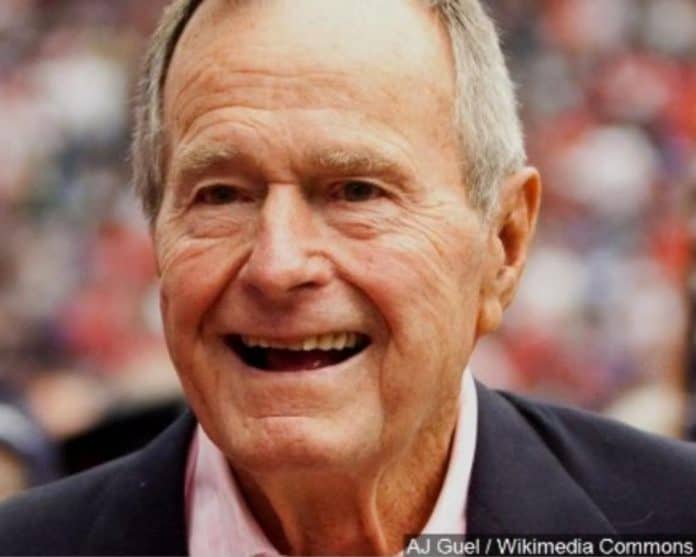 News broke at the end of last week that George H. W. Bush, the nation’s 41st president and last World War Two veteran to serve in the White House, had passed away at the age of 94 leading to some major reevaluation of his public service.

Some of the praise lavished on Bush focusing on his decency, integrity, public service and character came off as shots at current President Donald Trump but there are plenty of reasons to cheer the Connecticut preppie turned Texan who sat in the Oval Office from 1989 until 1993. Bush is one of the few presidents who will be treated better by history than he was by the voters.

Looking back at his four years in the White House, Bush is one of the rare presidents–William McKinley and James K. Polk might be the only other ones–whose legacy overwhelmingly rests on foreign policy instead of domestic issues.  The unraveling of the Soviet bloc should have been chaotic and divisive. The fact that it went as smoothly as it did was thanks in large part to Bush’s steady and undramatic leadership. The former captain of the Yale baseball team was smart enough not to trot around the bases after America hit a walkoff homerun to win the Cold War.

Bush’s genteel style–personal contact with international leaders, handwritten notes to the world’s movers and shakers–has often led to his tenure as president being taken for granted in the more than a quarter century after he left the White House. Take the reunification of Germany for example. In the aftermath of the Berlin Wall falling, talk about German reunification summoned the ghosts of the past–Bismark in Versailles after the Franco-Prussian War, Kaiser Wilhelm II, the Nazis. Aided by his foreign policy team–James Baker, Brent Scowcroft, Condi Rice–Bush was able to calm those fears and helped move reunification along.

Certainly Bush’s handling of the Gulf War looks sagacious in retrospect. Assembling the strongest coalition of nations the world has ever seen, Bush led efforts to drive Saddam Hussein’s forces out of Kuwait–and went no further. With American forces still in Afghanistan and Iraq more than 17 years after 9/11 thanks in large part to his son’s policies, Bush’s leadership in 1990 and 1991 and his decision to keep the troops rushing to Baghdad to topple Saddam look even more commendable in the rearview mirror. Dick Cheney, who was Bush’s Defense secretary, and George W. Bush should have taken notes.

Bush drew fire for neglecting domestic affairs and there aren’t many accomplishments on that front that stand out. While plenty on the right opposed it when Bush signed it, the Americans With Disabilities Act has stood the test of time. The economic downturn of the early 90s and Ross Perot’s campaign cost Bush a second term. Perot’s efforts were boosted by conservatives who never forgave Bush for breaking his “no new taxes” pledge. Bush seemed disengaged as he ran for a second term and his effort wasn’t helped by the early death of Lee Atwater who had guided him to his big win over Mike Dukakis in 1988. Still, the economic problems of the early 90s pale in comparison to the Great Recession and, in retrospect, come off as a minor bump in the road during two of the best decades in American economic history.

Bush held a weird spot on the political map. With one foot in New England and the other in Texas, the Lone Star Yankee never quite fit in either. He was too conservative for the declining Rockefeller Republicans and too moderate for the Reagan wing. The son of Connecticut Senator Prescott Bush, the newcomer to Texas tried to lead the GOP in his adopted state with Senate bids in 1964 and 1970 which came up short though, after winning a seat in 1966, he did serve two terms in the House.

Simply put, Bush was saved from the political scrapheap through a series of appointments. Richard Nixon tapped him to serve as ambassador to the UN and to lead the Republican National Committee (RNC). In that role, leading the GOP through the Watergate scandal, Bush urged Nixon to resign in 1974. After considering him to be vice president, Gerald Ford also extended Bush’s career by having him serve as ambassador to China and lead the CIA. In 1980, Bush ran for president and was able to outwork a host of Republicans to win the Iowa caucus only to get crushed by Ronald Reagan in New Hampshire after freezing up in a crucial debate where the Bush team tried to exclude other candidates. Despite that, Reagan tapped Bush as vice president which helped launch him to the presidency in 1988.

Most presidents who end up in the White House through the appointed route simply don’t have the political base to sustain major setbacks–and Bush was no exception. Hammered from the right by Pat Buchanan in the 1992 primaries and seeing some of his support defect to Perot in the general election, Bush followed in the footsteps of presidents who moved up the political ladder through appointments like Herbert Hoover, William Howard Taft, Chester A. Arthur and James Buchanan, none of whom claimed a second term.

Of course, Bush’s shadow will loom larger thanks to his sons’ successes at the state level and George W. Bush serving as the 43rd president. Bush 41 is also boosted by the challenges and tribulations suffered by the presidents who served after him who presided over far more turbulent eras. Bush’s character certainly looks better compared to Trump or Bill Clinton. His handling of foreign affairs towers over his son’s and Barack Obama’s.

The last president of the Greatest Generation, Bush was defeated by the first Baby  Boomer president as America shifted from the Cold War to the Internet boom. James Baker’s claim that Bush was the best one term president in American history seems a little off–Polk, for example, took the nation to the Pacific and claimed the Southwest despite his efforts to squash Whig generals like Winfield Scott and Zachary Taylor in the Mexican-American War. Still, Bush stands higher than most one term presidents. Bush’s legacy, as impressive as it is, will probably keep him below the scions of another political dynasty with New England roots though a case can be made that both John Adams and, more definitively, John Quincy Adams are celebrated more for their achievements outside the White House than in it. JFK, the first member of the Greatest Generation to win the presidency and the son of yet another political dynasty from New England, will also probably remain ahead of Bush in the years to come. As for the rest of the one termers, Bush is head and shoulders above them.

If the 80s and 90s were the high point of American prestige, power and wealth–and they certainly appear that way for the moment–Bush will be seen as more than the last member of the Greatest Generation to serve as president. He will be seen as one of the last of the good presidents, a man of strong character who presided over important times and did so in a way that cut down on chaos and turbulence. Romans facing the Crisis of the Third Century must have felt that way about Antonius Pius, one of Gibbon’s “Five Good Emperors.” When he imitated Bush on ‘“Saturday Night Live,” Dana Carvey had “wouldn’t be prudent” as one of his catch phrases. Prudence is an underrated virtue in politics. It’s one of the reasons why Antonius Pius is far less known today than Caligua, Nero or Commodus. But it’s also why Romans looked back to the days when Antonius Pius was emperor as some of the best years in their history. With politics getting increasingly confrontational, with tribalism on the rise, with social media dissolving traditional discourse, with generations at each other’s throats, with a national debt over $20 trillion, with tensions rising overseas and with America stuck in apparently endless wars, prudence is badly needed in public life–and it’s exactly what George H. W. Bush offered during his commendable service as the youngest Navy pilot in World War Two, as a father and husband, as a business leader, as a congressman, as an ambassador, as leader of the CIA, as vice president, as a citizen and as one of the better presidents this nation has seen.