Nuñez cited figures from the National Coalition Against Domestic Violence noting “nearly 20 people per minute, or 10 million a year, are physically abused by an intimate partner in the United States.”

“For far too long, domestic violence has been an abuse hidden in plain sight, and yesterday’s discussion was not only proof that no one is immune, but it was a step forward in aiding victims suffering in silence,” said Nuñez. “Our administration is committed to providing support resources, intervention programs and counseling services for those in need.”

Nuñez was joined by leaders from across South Florida at the event on Monday.

“I am honored to join my voice in support of engaging, educating and empowering individuals on such an important topic,” said Miami-Dade School Board Member Susie Castillo. “Our schools are the first line of defense in ensuring that we put an end to domestic violence. As a Miami-Dade School Board member, I will continue advocating for eradicating all types of abuse with the legal and preventive services discussed here today.”

Other members of the panel includes leaders from FIU, the Florida Department of Children and Families (DCF) and the Miami-Dade County Community Action and Human Services.

“Governor DeSantis and I stand in support of these victims, and we seek to shift power back to them by ensuring laws are enforced and offenders are prosecuted to the fullest extent of the law,” Nuñez said. 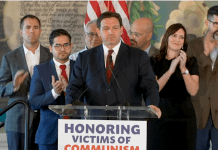