At the end of last week, Lt. Gov. Jeanette Nuñez announced that she will lead a delegation of an export sales mission to Bogotá, Colombia.

The mission, which will feature small and mid-sized businesses will be coordinated by Enterprise Florida (EFI), will take place from November 18-21. Almost 20 manufacturing and exporters from the Sunshine State will take part in the mission and they “will be matched with Colombian importers through the United States Embassy’s Gold Key Program in pursuit of long-term trade opportunities.”

Nuñez weighed in on the trade mission on Friday.

“Colombia is an important trading partner for our state, and this mission offers a great opportunity for Florida companies looking to expand their global presence,” said Nuñez. “I look forward to leading this delegation on behalf of Governor DeSantis and the people of Florida to underscore the priority that international export markets mean for Florida’s economy. We look forward to renewing longstanding trade relationships with Colombia and creating new market opportunities for the small businesses traveling with us.”

As Nuñez noted, Gov. Ron DeSantis is behind the mission and the governor’s office stressed the ties between Colombia and the Sunshine State.

“Colombia is the fourth-largest economy in Latin America and has the third-largest population in the region with approximately 49 million citizens. The United States is Colombia’s largest trading partner, and bilateral trade between the two countries reached nearly $27 billion in 2017. With $7.2 billion in two-way trade, Florida accounts for 27 percent of all U.S. trade with Colombia – more than any other state,” the governor’s office noted.

“International export missions like this one benefit Florida’s small and mid-size businesses by helping them access new markets for their Florida-made goods and services,” said Florida Commerce Sec. Jamal Sowell, the president and CEO of EFI. “Enterprise Florida continues to help Florida companies expand globally and generate the kinds of sales that keep Floridians working and businesses growing.”

Last year, then Gov. Rick Scott headed to Colombia to attend the inauguration of new President Ivan Duque. Now a member of the U.S. Senate, Scott also visited Colombia earlier this year to shore up opposition to the Maduro regime in Venezuela. 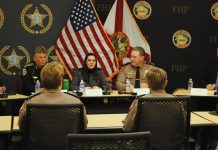 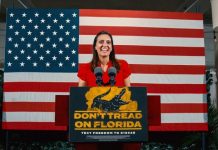