Boyd, who served four terms in the Florida House, launched his bid on Thursday as he looks to keep Galvano’s seat, which includes all of Manatee County and part of Hillsborough County, for the GOP.

“We must continue to work diligently to control the budget, keep taxes low, secure the border, and protect our waters and quality of life,” said Boyd. “It was such an honor to represent my hometown in Tallahassee for eight years. I look forward to the opportunity to return to the Florida Legislature and serve the people of Manatee and Hillsborough Counties, as well as our beloved state of Florida.”

Boyd, the CEO of Boyd Insurance and Investment Services, has been on the Florida political stage for three decades, starting in 1989 on the Palmetto City Council and serving as vice mayor and mayor of that town. When Galvano faced term limits in the Florida House back in 2010, Boyd ran to replace him and easily won in a secure GOP district in Manatee County which he represented until last year when he was termed out.

The Senate District is heavily Republican. Back in 2016, Republican voters made up 43 percent of the district while 30 percent were Democrats. Teacher Amanda Linton is running for the Democratic nomination. 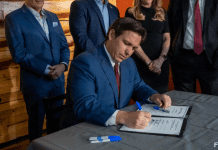