After defeating longtime U.S. Rep. Corrine Brown, D-Fla., in the primary and getting elected to the House for the first time in 2016, Lawson was named a regional whip.

“It is a privilege to welcome Rep. Al Lawson back as an assistant whip during the 117th Congress,” Clyburn said. “He is a valuable member of our whip organization, and I look forward to continuing our work together to advance the Democratic agenda.”

“I am honored to receive this esteemed position and have the opportunity to create a lasting legislative impact for the residents of North Florida,” Lawson said. “Together, we can further mold and improve the quality of life for all Americans and ensure an equitable future for generations to come. I am thankful to Whip Clyburn’s leadership, and I am ready to work with my colleagues to move our nation forward.”

First elected to Congress in 2016 after decades in the state Legislature, including leading Democrats in the Florida Senate, Lawson represents parts of North Florida with his district stretching from Jacksonville to Gadsden County.

While he will be impacted by redistricting before 2022, Lawson currently represents a district that is secure for the Democrats. He easily defeated Republican Gary Adler in November, taking 65 percent of the vote. 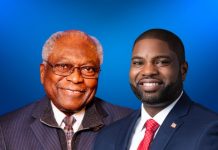