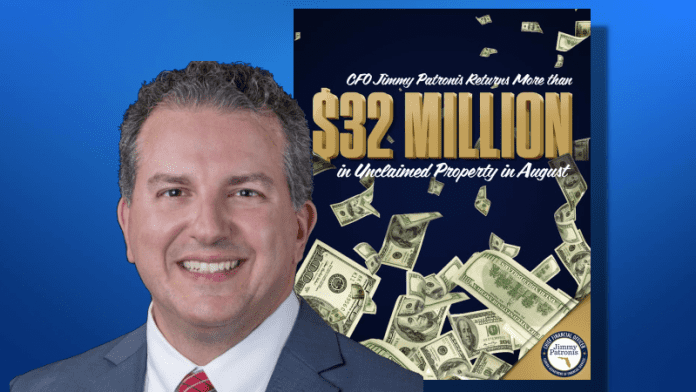 On Tuesday, state Chief Financial Officer (CFO) Jimmy Patronis announced that more than $32 million in unclaimed property was returned to Floridians during the month of August.

Since Patronis took office in 2017, more than $1.7 billion in unclaimed property has been returned to Florida citizens.

“I’m excited to announce the return of more than $32 million in unclaimed property to the pockets of Florida families and businesses in the month of August. That’s an amazing injection of cash into Florida’s communities and it’s my mission to continue to return every cent of unclaimed property back to its rightful owner. Until claimed, the state is proudly putting these dollars to work for Florida’s students by funding vital public education programs. Search now for unclaimed property for yourself, your friends, your loved ones, and even your business at FLTreasureHunt.gov. It’s your money, claim it now!” Patronis said on Tuesday.

Unclaimed property is a financial asset that is unknown or lost, or has been left inactive, unclaimed or abandoned by its owner. The most common types of unclaimed property are dormant bank accounts, unclaimed insurance proceeds, stocks, dividends, uncashed checks, deposits, credit balances and refunds. Unclaimed property also includes contents from abandoned safe deposit boxes in financial institutions. Unclaimed property assets are held by business or government entities (holders) for a set period of time, usually five years. If the holder is unable to locate, re-establish contact with the owner and return the asset, it is reported and remitted to the Florida Department of Financial Services, Division of Unclaimed Property.