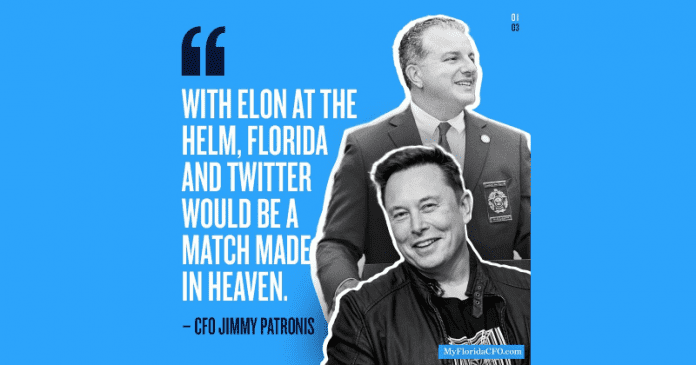 This week, Florida Chief Financial Officer (CFO) Jimmy Patronis doubled down on his call for Elon Musk to move Twitter to Florida.

“This acquisition is both a win for free speech and a win for Florida’s pension system,” Patronis said. “With Elon now in full control of the company, I will continue my campaign of attracting Twitter to Florida. While I do believe Elon has the right intentions, he will be battling a culture that lives, works and plays in San Francisco, which is the epicenter of wokeness, groupthink and speech codes. No doubt, Elon’s pro-freedom sentiments, as well as Twitter’s margins, would benefit with a move to the Sunshine State. We have no income tax, we love freedom, and we believe in public safety. With Elon at the helm, Florida and Twitter would be a match made in heaven.”

Earlier this month, Patronis sent a letter to Musk following his purchase of a multibillion-dollar stake in Twitter, making him the largest shareholder of the social media company.

Patronis, as a member of the Enterprise Florida Board of Directors, called on Musk to move Twitter’s corporate headquarters from California to Florida.

Congratulations on becoming the largest individual shareholder of Twitter. As you are well aware, little-by-little Twitter has drifted away from its mission of providing a forum for the free flow of ideas, and I’m hopeful that with your influence this platform can unwind some of its garbage-adjacent censorship policies. With that in mind, I would like to invite you and your team to the Sunshine State to experience all of the reasons why you should consider moving Twitter headquarters out of California and to the Free State of Florida. I think Twitter’s culture could benefit from being in a state that values liberty and has not been taken captive by the thought police (unlike California). There is no Ministry of Truth here. Just freedom, beaches and a lot of opportunity.

As Florida’s Chief Financial Officer and a former small business owner myself, I have seen the challenges the woke agenda, and ESG ideology, has caused social media platforms like Twitter. Corporate glad-handing to online mobs has detracted from free speech and free thought. New ideas are blocked, or muted, and creativity is demonized. For example, Twitter’s recent de-platforming of the Babylon Bee is a total disgrace. I wholeheartedly agree with you that free speech is essential to a functioning democracy. In Florida, under Governor Ron DeSantis’ leadership, we value free speech and honest debate. We also know what it means to grow or maintain a business and the tools they need to succeed.

You recently moved Tesla out of California due to their state government’s obvious distain for your businesses and others like them. While Texas is an upgrade over California – a low bar – you should seriously consider moving Twitter further east. In Florida, you won’t have an unreliable electric grid – problems you’ve already experienced in the Lone Star State. With my time on the Florida Public Service Commission, I know firsthand the strength of Florida’s power grid and, with what you have built with Starlink, this combination could provide the ultimate backbone for the world’s largest social media company.

You already trust the Florida Space Coast with SpaceX – you should relaunch a new and improved Twitter right here in Florida. The fact is Florida is for Winners, and you have had incredible success in creating winning products. My door is always open, and my phone is ready to take your call. Also, since you now own a good portion of Twitter, you can even tweet me at @JimmyPatronis. Let’s discuss all the ways Florida can benefit Twitter and grow the platform where everyone has a voice and free speech is valued.

As a member of the Enterprise Florida Board of Directors, the business development arm of the state, I’d be honored to introduce you to our team and help you find the perfect place to start relocating Twitter headquarters. Florida offers an amazing business climate, with no personal income tax, low corporate taxes, an educated workforce and a fantastic quality of life. I have no doubt the Twitter team would thrive in the Sunshine State.