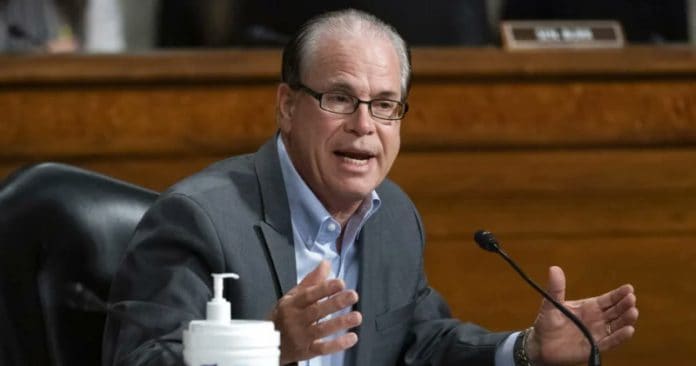 The record high inflation that is plaguing Americans is being fueled by out-of-control federal spending. The federal government has spent over $6 trillion on COVID-19 related pandemic stimulus measures. The most recent, American Rescue Plan Act (ARPA) was not even needed as most states are experiencing large surpluses. The national debt is over $30 trillion and rising, which translates to an estimated $97,500 per citizen. This does not even include the unfunded liabilities of entitlement programs such as Medicare, Medicaid, and Social Security. The United States is confronted with a serious debt crisis and if Congress does not rein in spending it will create dire economic and national security consequences. U.S. Sen. Mike Braun, R-Ind., is attempting to restore fiscal sanity. Sen. Braun is proposing a budget plan that will begin the process of addressing out-of-control spending.

Government spending is not the only cause of high inflation. The poor monetary policies of the Federal Reserve have also helped create our current economic situation. The crisis in supply-chains is another factor. Nevertheless, poor fiscal policies originating from Congress are the root cause. The national debt already consumes 123 percent of Gross Domestic Product (GDP), and Uncle Sam is paying billions in interest payments, which are estimated to increase to $1.2 trillion by fiscal year 2023.

Often blame is placed on the Tax Cuts and Jobs Act for both the rising debt and deficits, but what is often ignored is the fact that the federal government is collecting more revenue because of the tax cuts. The problem is spending.

Sen. Braun’s budget proposal seeks to bring much needed reform to a broken budget process. The plan calls for establishing a fiscal rule that would place a cap on total spending, excluding interest, to a percentage of potential GDP. Under this fiscal rule, in year 10, spending would be held at 17.5 percent of potential GDP, which is the 50-year average for revenue, and would place the budget on a pathway to be balanced. This would bring the budget back into primary balance within 10 years and do so without either increasing taxes or creating new taxes.

The proposal also makes some budgetary reforms such as ending earmarks and it removes some federal programs that are on “auto-pilot.” This is important because mandatory spending has increased from 39 percent of the budget in 1969 to over 74 percent today. It also creates a fiscal commission to reform major entitlement programs to ensure that they can continue into the future.

Sen. Braun’s budget plan will also require Congress to exercise its constitutional oversight responsibilities by addressing the $432 billion in appropriations that are associated with 402 programs which have lapsed but are still being funded.

The budget reform plan offered by Sen. Braun should receive serious consideration. Federal policymakers need to remember that the Constitution created a government of limited enumerated powers. In addition, the out-of-control spending is not just hurting taxpayers and the economy at large, but it is undermining federalism.

States are becoming too dependent upon the federal government. As an example, the Iowa legislature passed a $8.2 billion budget, but also receives over $9 billion from the federal government. This does not include the pandemic related stimulus funds. Often state legislators are limited in terms of policymaking because so many policy areas are tied to federal funding. States also need to be better prepared to deal with any potential loss or decrease in federal funds.

Many state governors are practicing prudent budgeting. Governor Kim Reynolds has demonstrated that conservative budgeting, along with pro-growth tax reforms, creates an environment for a stable fiscal foundation and a growing economy. This is a blueprint that the federal government needs to follow.

President Calvin Coolidge regarded “a good budget as among the noblest monuments of virtue.” Coolidge understood the need the importance of keeping spending levels low to achieve both lower tax rates and economic growth. Coolidge, along with his predecessor, President Warren G. Harding made economy in government a priority. They understood the importance of a balanced budget and not allowing the national debt to get out-of-control.

Sen. Braun’s budget proposal is a serious policy solution that will start addressing our national debt crisis. This is an idea that is rooted in fiscal conservatism that will hopefully start restoring constitutional limited government and federalism.