Rutherford weighed in on Tuesday on why he introduced the bill.

“Floridians know the importance of safeguarding our many coastal communities and unique tourism industry,” said Rutherford. “We’ve already seen how an oil spill can be an environmental disaster for the ecosystem and decimate coastal economies. The PROTECT Florida Act will prevent drilling and seismic testing off Florida shores for ten years, codifying this important protection into law instead of relying on federal regulations that can change at any time. I’m proud to be joined by a bipartisan coalition to say ‘no’ to offshore drilling.”

Rutherford’s bill was sent to the U.S. House Natural Resources Committee this week. So far, there is no companion measure in the U.S. Senate. 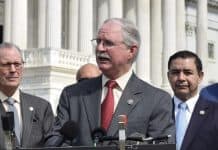