“Today’s order is a huge win in our fight to force the Biden administration to fix the crisis by following the law. As the order states, ‘not even the President is above the law,’ and I look forward to advancing our case to hold the Biden administration accountable for ignoring public-safety immigration laws and turning our nation’s last bastion of protection into nothing more than a speedbump,” Moody said.

In the court order denying the motion to dismiss, Wetherell wrote, “Suffice it to say the Court is wholly unpersuaded by Defendants’ position that they have unfettered discretion to determine how (or if) to comply with the immigration statutes and that there is nothing that Florida or this Court can do about their policies even if they contravene the immigration statutes. This position is as remarkable as it is wrong because it is well established that no one, not even the President, is above the law and the Court unquestionably has the authority to say what the law is and to invalidate action of the executive branch that contravenes the law and/or the Constitution. Thus, if Florida’s allegations that Defendants are essentially flaunting the immigration laws are proven to be true, the Court most certainly can (and will) do something about it.”

Additionally, the order summarized some of the state’s allegations and characterizes the damage caused to the border as a result of, “…restrictions in the immigration statutes and that the policies have effectively turned the southern border into little more than a speedbump for the hundreds of thousands of aliens who have flooded across the border into the country since January 2021.”

In September, Moody filed the complaint challenging Biden’s catch and release policy. According to federal law, arriving immigrants, including those claiming asylum, are required by law to be detained while immigration courts determine if there is a valid basis to enter the United States. U.S. Customs and Border Protection has already released hundreds of thousands of illegal border crossers since taking office. 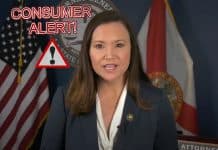