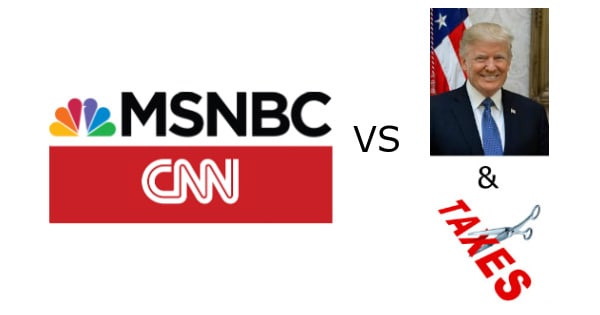 Liberal activists are gloating over their ability to deceive Americans into believing that their taxes didn’t decrease last year. Big mistake.

“Nobody likes to give themselves credit for this kind of messaging success, but progressive groups did a really good job of convincing people that Trump raised their taxes when the facts say a clear majority got a tax cut,” Vox senior correspondent Matthew Yglesias tweeted a week before Tax Day.

Yglesias was right. The article that prompted his tweet mentioned an NBC News/Wall Street Journal poll revealing that just 17 percent of taxpayers thought their taxes went down in 2018, while 28 percent thought their taxes had actually increased. The results are startling because in truth about 80 percent of American taxpayers benefit from President Donald Trump’s tax cuts.

In Florida, the average individual tax cut came out to just over $1,000, a decrease of nearly 12 percent compared to 2017. Businesses, meanwhile, have been using their tax savings to expand hiring, increase wages, and invest in new facilities and equipment.

Democrats and liberal activists, however, have peddled incomplete, cherry-picked data in an effort to undermine popular support for one of President Trump’s signature achievements — the 2017 tax cuts that continue to fuel a historic economic boom.

Liberals have been predicting for months that the economy will soon falter, but strong economic data keep disproving that theory, so they turned to deliberately misleading people about a crucial provision of the Tax Cuts and Jobs Act (TCJA) in order to make it seem as though ordinary American families didn’t benefit from that sweeping overhaul of the tax code.

In the interest of maximizing the benefit to taxpayers, the TCJA made changes to withholding tables that reduced overpayment. While that caused a limited number of individuals to receive smaller-than-expected tax refunds this year, that was only because they got to keep a larger portion of every paycheck they earned in 2018.

In reality, the president’s tax cuts reduced 2018 federal income tax obligations by about $1,600 for the average American taxpayer — for a family of four with an income of $75,000, the savings from the Trump tax cuts exceeded $2,000.

It would have been more politically advantageous for Republicans to leave withholding tables alone so that Americans would experience those tax cuts as a lump-sum windfall during tax season, but the TCJA was about strengthening the economy, not scoring political points. Allowing Americans to start spending their tax savings immediately was crucial to the president’s goal of reviving the economy as quickly as possible.

It turned out to be a good deal for ordinary citizens, too, especially those who live paycheck-to-paycheck. Think of it this way: would you rather have an extra $133 in your bank account every month, or wait a full year to receive $1,600 that was rightfully yours the whole time? President Trump believes you know how to spend your money better than Washington does.

Members of the liberal establishment, however, believe the federal government should be entitled to first dibs on every dollar you earn, and they engaged in a sustained disinformation campaign to prevent Americans from realizing how much they benefited from Trump’s tax cuts.

U.S. Sen. Kamala Harris, D-Calif., a leading contender for her party’s presidential nomination, even went so far as to complain that “almost half of working families are a $400 unexpected expense away from financial disaster” while attacking the TCJA, conveniently ignoring the fact that the law was specifically tailored to ease the burden of those very families, and is doing so successfully.

Although the complexity of the tax code and the shell game of automatic withholding has allowed Democrats to mislead people thus far, however, their high-fiving and back-slapping is premature. People can’t help but notice improvements in their own lives, and in the Trump economy — there’s plenty of improvement to notice. Thanks to the president’s tax cuts, working families are not only getting more out of every paycheck, but those paychecks are growing faster than they have for many years, and there are far more of them to go around.

Liberals are pretty pleased with themselves for pulling off this deception, but tricking voters isn’t something to be proud of, and it’s a remarkably short-sighted political strategy. Their lies about the Trump tax cuts may have gotten them through Tax Day, but there’s no way they’ll hold up until Election Day.

Julio Gonzalez is the founder of Engineered Tax Services.