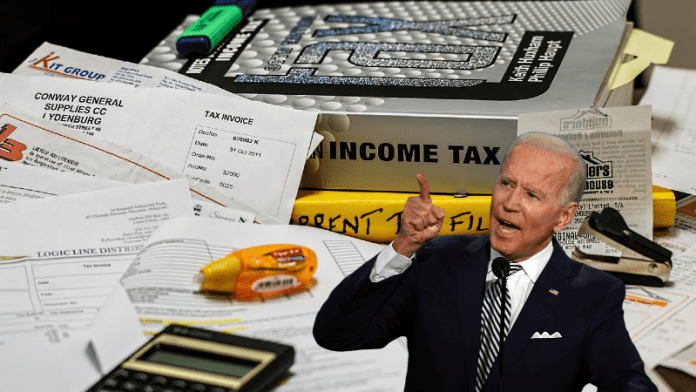 The Biden administration’s decision to recruit nearly 90,000 new IRS auditors could have a chilling effect on small businesses and economic growth, permanently impeding our nation’s ability to recover from its current economic malaise.

As part of the misleadingly titled “Inflation Reduction Act,” President Biden and his allies secured roughly $80 billion in new IRS funding to hire 87,000 auditors. This is bad news for the American economy.

One of the many ways that small businesses can succeed and help grow the economy is by taking advantage of tax credits and deductions which leave more money in the hands of owners to reinvest in their businesses and offer more competitive pay for their employees.

But with the looming threat of a veritable army of auditors being mobilized by the Biden administration, it is highly likely that many small businesses will decline to seek the benefits of those credits and deductions, lest they face the costly headache of aggressive audits from the IRS. In fact, my firm, Engineered Tax Services, specializes in working with businesses to understand and utilize those credits and deductions, and some of my firm’s small business clients have told me this is the case.

“There is no doubt that boosting IRS audit capabilities through a vast increase in the hiring of 87,000 new staff focused on this effort will hit small businesses the hardest,” said Karen Kerrigan, president and CEO of the Small Business and Entrepreneurship Council, in an interview with the Center Square. “The tax data shows that it is small businesses of moderate means, not ‘the wealthy,’ that are targeted most frequently.”

Basic math proves this will undoubtedly be the case with Biden’s new Auditor Army. Biden wants to unleash 87,000 additional IRS agents on the American people, but there are fewer than 800 billionaires and roughly 34,000 millionaires in the country. Even if each of them gets assigned a full-time, year-round personal auditor, that leaves 52,200 agents free to harass small business owners and everyday Americans.

Undergoing an audit is an incredibly serious and costly endeavor, regardless of the reason for the audit or the outcome, and this cost is a burden both on the business and the community in which it operates, a clear impediment to economic growth and prosperity. Even when auditors find no wrongdoing, the experience can be financially devastating for small business owners.

“Obviously, this will be a huge burden on many small business owners, who will be forced to endure lengthy audits and do not have the resources to hire expert lawyers or accountants,” Kerrigan explained.

“Some will be forced to bring in this expensive support, which means fewer resources to invest in their business, their workers and their communities…. Dealing with crushing inflation and the economic downturn is unbearable enough for small business owners, without having this type of threat hanging over their heads,” he continued.

The insult to the injury Biden’s Auditor Army will inflict on the American economy is that it comes at a time when many small businesses are already facing severe economic hardship, if not outright ruin.

A July survey by t​​he small business network Alignable found that “45 percent of small businesses (SMBs) are halting their hiring, largely because they say they can’t afford to add staff.”

A different survey conducted by the same network, also in July, revealed that “47 percent of small business owners … say their businesses are at risk of closing by fall 2022, unless economic conditions improve significantly.”

That number is “up 12 percentage points from last summer, when only 35 percent were concerned about economic issues forcing them to shut down,” according to Alignable, and “SMBs in key industries face even bigger problems: 59 percent of retailers are at risk, along with 52 percent in construction, 51 percent in the automotive sector, and 50 percent of restaurant owners.”

Our small businesses are in crisis, and the last thing they need is an army of militarized bureaucrats going door to door carrying out audits, further crippling those businesses and the economic growth they generate.

Julio Gonzalez is the CEO and Founder of Engineered Tax Services, Inc. This piece originally ran at RealClearPolitics.