The selection of U.S. Sen. Kamala Harris, D-Calif. as the running mate for former Vice Joe Biden is drawing praise and scorn from politicians across Florida and at the national level.

Terrie Rizzo, the chairwoman of the Florida Democratic Party, said she thinks Harris is the right choice.

“Senator Kamala Harris is a brilliant, compassionate, fierce leader and I could not be more excited to support her as our next vice president of the United States! Senator Harris has spent her life fighting for the people and is ready on day one to help restore the soul of our nation. The Biden-Harris team is a force to be reckoned with and I’m confident will help Democrats win up and down the ticket. We have 83 days to go – let’s get to work!” Rizzo said.

Not surprisingly, Democrats are lauding the pick. U.S. Rep. Alcee Hastings, D-Fla., noted that Harris is the first African-American woman on the ticket for a major party.

“This is a truly historic ticket. I applaud Joe Biden for picking such an exceptional running mate. Senator Harris is a trailblazer and a fighter for all Americans. Seeing a member of the ‘Divine 9′ rise to be the vice presidential nominee makes me filled with both pride and confidence, because I know she has what it takes to go up against Donald Trump. Times are tough right now and we need proven leadership and the ability to get things done. That is exactly what Senator Harris offers,” Hastings said.

“To see a black woman nominated for the first time reaffirms my faith that in America, there is a place for every person to succeed no matter who they are or where they come from,” said Demings.

Harris also has the support of LBGTQ Democrats.

“Men, who will never understand our needs and challenges, have been making decisions on women’s worthiness and rights for too long. More women in high office moves equality forward, which we need more than ever after years of the Trump administration and congressional Republicans chipping away at our rights,” said Beth McMillen, the treasurer of the Florida LGBTQ Caucus.

The reaction from Republicans was nowhere near as kind.

“As you all know, Joe Biden and the Democratic Party have been overtaken by the radical left. So given their promises of higher taxes, open borders, socialized medicine, and abortion on demand, it’s no surprise that he chose Senator Harris,”  Vice President Mike Pence told a crowd shortly after the announcement.

Pence will take on Harris in the vice presidential debate which is scheduled for October 7th in Salt Lake City.

In a late night call with reporters, U.S. Sen. Marsha Blackburn, R-Tenn., piled on, saying, “Kamala Harris will be the most liberal, leftist nominee for VP that our country has ever seen,” a

“A hiding, diminished, and incoherent Joe Biden didn’t just select a vice-presidential candidate, he chose the person who would actually be in charge the next four years if he is somehow able to win. Kamala Harris’ extreme positions, from raising taxes to abolishing private health insurance to comparing law enforcement officials to the KKK, show that the left-wing mob is controlling Biden’s candidacy, just like they would control him as president. These radical policies might be popular among liberals, but they are well outside the mainstream for most Americans,” said RNC Chairwoman Ronna McDaniel.

“Joe Biden’s selection of Kamala Harris for VP is not surprising — it is simply yet another illustration of the Democrats’ failing agenda. Harris has pushed for higher taxes, come to the defense of sanctuary cities, and championed late-term abortion. She is an extreme, divisive, and polarizing figure who not long ago made personal attacks on Biden, suggesting he is racist. Harris clearly is a threat to all conservative values and viewpoints,” Eagle said. 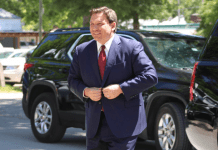