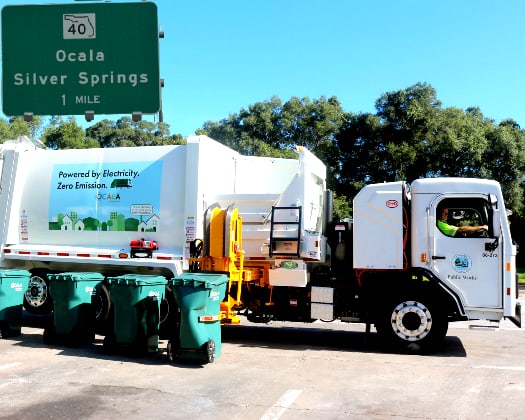 Cammack said that the Environmental Protection Agency (EPA) is sending $777,0000 to Ocala through a Diesel Emission Reduction Act Award grant.

“The city will use the money to replace heavy-duty diesel-fueled trucks with zero-emission, electric-powered refuse trucks,” Cammack’s office noted. “The city of Ocala will be among the early adopters of the new technology in the country and one of Florida’s first cities to implement the new sanitation trucks in its fleet.

“The vehicles will be deployed this month and will be used for residential routes as the staff focus on training to maintain customer efficiency and effectiveness,” the congresswoman’s office added.

“Ocala’s new refuse trucks will establish the city of Ocala as one of Florida’s leaders in responsible, sustainable waste management,” said Cammack. “I’m proud to have authored letters of support and offered guidance to aid the Ocala team in their grant efforts, and I know residents will be pleased to see more of these trucks deployed across the city.”

“The city of Ocala is appreciative of the relationship we have with Congresswoman Cammack’s office. Her support of our project was critical to the success achieved in Ocala being awarded over three-quarters of one million dollars from the EPA,” said Jeannine Robbins, Ocala’s strategic and legislative affairs administrator. “The end result is a greener and healthier community.”