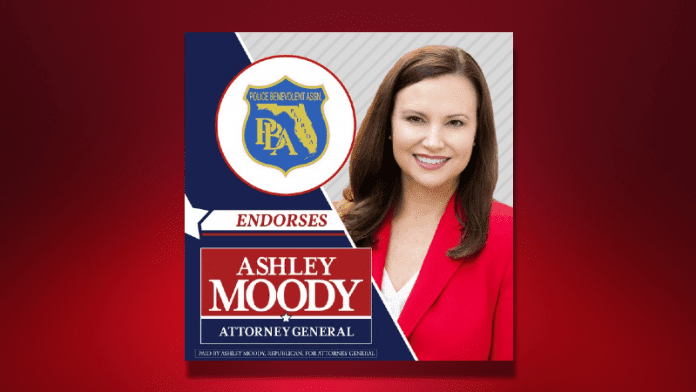 “Florida is home to so many incredibly brave and selfless law enforcement officials. We must continue to support them as they put their lives on the line, every single day, to ensure our families, friends, and neighbors are protected from predatory scams and senseless crimes. I am committed to leading these efforts and collaborating with the Florida Fraternal Order of Police, Florida Police Benevolent Association, and the Florida Police Chiefs Association to ensure their members have the resources they need and know, without a doubt, that they are valued. It is truly an honor to have these well-respected organizations’ endorsements, and I look forward to the important work we will accomplish together in the years ahead,” said Moody.

Bobby Jenkins, the president of the Florida Fraternal Order of Police, praised Moody.

“The Florida Fraternal Order of Police have firsthand knowledge of the dedication and leadership shown by Ashley Moody, and we are proud to endorse her to continue the hard work that she has begun in Florida as its attorney general,” Jenkins said.

“As our attorney general, Ashley Moody insists that the men and women of law enforcement and corrections be treated with the utmost respect. Her ‘Back the Blue’ campaign continues to support and defend the law enforcement officers of our state by highlighting all the good officers from Florida do for our society. We know that Ashley Moody and her administration will protect law enforcement and correctional officers. We have her back, and we know she has ours,” said, Florida Police Benevolent Association President John “Kaz” Kazanjian.

Fellsmere Police Chief Keith Touchberry, the president of the Florida Police Chiefs Association, explained why his group was backing Moody.

“On behalf of the Florida Police Chiefs Association, we are honored to endorse Attorney General Ashley Moody for reelection. General Moody has devoted her entire career to enforcing our laws, preserving the safety of our communities, and upholding the rule of law,” he said.

Last week, the Moody campaign showcased the support of almost every sheriff in the Sunshine State.