Four separate polls taken this month show most Democratic voters support the Black Lives Matter (BLM) protests and calls for defunding local police while others are not as supportive.

An Ipsos poll taken for ABC found that 64 percent of Americans are opposed to the movement to defund the police but a majority of Democrats–55 percent–support it.

The Ipsos poll finds a racial divide as 57 percent of black voters support the movement to defund the police while three out of four white voters and 57 percent of Hispanics oppose it. 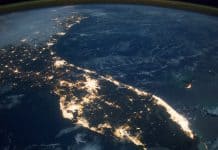 Florida the Most Desirable State to Live, New Poll Shows