Last week, the Internal Revenue Service (IRS) insisted that these expenses could not be deducted. Supporters of the bill insist that was not what Congress wanted when it launched the PPP as part of the $2.2 trillion stimulus package at the end of March.

“The congressional intent of the PPP program was to keep workers connected to their jobs and to ease the financial burden on small businesses so they could weather this pandemic,” Rubio said when he threw his support behind the bill on Wednesday. “Borrowers should not be penalized by new taxes because they sought help during this unprecedented crisis. I appreciate my colleagues Senator Cornyn and Chairman Grassley, as well as Senator Carper and Ranking Member Wyden for introducing this bill to rectify IRS’s ruling.”

“The Paycheck Protection Program has been a lifeline to small businesses in Texas during the coronavirus pandemic,” said Cornyn. “This legislation would erase any confusion by clarifying that expenses paid with a forgiven PPP loan can still be deducted from small businesses’ taxes.”

“When we developed and passed the Paycheck Protection Program, our intent was clearly to make sure small businesses had the liquidity and the help they needed to get through these difficult times. Unfortunately, Treasury and the IRS interpreted the law in a way that’s prevented businesses from deducting expenses associated with PPP loans. That’s just the opposite of what we intended and should be fixed. This bill will do just that,” Grassley said.

“Treasury’s guidance barring deductions for expenses paid by PPP loans is a gut punch for businesses struggling to stay afloat. It defies commonsense for Treasury to provide help on the front end, but then take it away on the back end. Our bipartisan bill would fix this mistake and ensure businesses feel confident using PPP funds to keep their workers employed,” said Wyden.

“Delaware small businesses that are the backbone of our economy have been hit hard by this unprecedented pandemic and need relief now,” said Carper. “Congress provided this relief through the Paycheck Protection Program, which gives small businesses a lifeline so that they can keep workers on payroll and pay rent and other necessary expenses while they weather the crisis. Our intention when creating this program was not to give assistance with one hand and take away ordinary business deductions with the other. Today, I am proud to join Senators Cornyn, Grassley, Wyden, and Rubio in introducing the bipartisan Small Business Expense Protection Act, a bill that would ensure small businesses in dire straits through no fault of their own aren’t hit with an unexpected tax bill when they receive much-needed federal relief.”

The bill was sent to the U.S. Senate Finance Committee this week. So far, there is no companion measure over in the U.S. House. 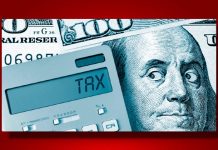 Andrew Wilford Opinion: States Raising Taxes On the Rich Should Expect a Line At the Exit