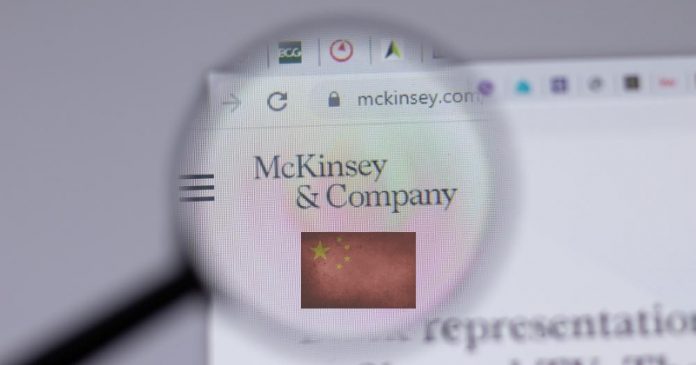 “In April, the U.S. Food and Drug Administration (FDA) announced that it would not issue new contracts with McKinsey & Company pending ongoing investigations into whether McKinsey failed to divulge potential conflicts of interest over its work with both the FDA and opioid manufacturers,” Rubio’s office noted. “McKinsey’s conflicting interests appear to go beyond its work with opioid manufacturers. The company retains deep ties with the Chinese Communist Party (CCP) even as it continues contracting with federal agencies.”

We write to request additional information on McKinsey & Company’s conflict of interest policy in light of concerns that have been raised regarding McKinsey’s business practices, including its ties with entities affiliated with the Chinese Communist Party (CCP).

Following a House Committee on Oversight and Reform hearing, the Food and Drug Administration (FDA) said it would not issue new contracts to McKinsey while it conducted a review of the company’s conflict of interest policies. While that is welcomed news, we remain concerned other conflicts may exist given McKinsey’s extensive client list and widespread presence within the United States government.

To be clear, the behavior documented by the House Oversight Committee’s investigation is alarming. On at least four occasions, McKinsey appears to have passed along non-public information based on its relationship with the FDA or discussed its willingness to do so:

In 2014, McKinsey partner Rob Rosiello told Purdue Pharma L.P., “[w]e serve the broadest range of stakeholders that matter for Purdue, including…State and Federal Regulators. One client that we can disclose is the FDA, who we have support [sic] for over five years. As part of the strategy effort, we will reach out to our network and bring to bear the full expertise of our Firm…”

In 2014, McKinsey’s Laura Moran told a Purdue executive, “[w]e found a partner colleague … who may be the right person …” The colleague was a long-time consultant for the FDA and helped the agency negotiate with another pharmaceutical company.

In 2016, McKinsey’s Arnab Ghatak emailed a colleague suggesting “it would be great for you or [Chilukuri] Sastry to talk about our work [with] FDA, specifically sentinel which I think would be [very] useful for them [Perdue] in opioids.”

And in 2018, McKinsey’s Jeff Smith forwarded communications with FDA officials to a colleague in preparation for a meeting with Perdue, noting, “[f]or opioids, my understanding is that Scott [Gottlieb, former FDA commissioner]’s push is to encourage manufacturers is to make 3 or 7 day blister packs and get the [A]merican [D]ental [A]ssociation to commit to guidelines.”

Each example raises serious questions about the “internal firewalls” McKinsey routinely claims to have in place when asked by lawmakers, federal contractors, or the press. What is more, these examples revolve around a single client, raising the specter that such casual disclosure of firewalled information could be happening routinely across the company. That is particularly alarming given the sensitive nature of McKinsey’s federal contracts and questionable foreign contracts, including with the CCP, People’s Republic of China (PRC), and entities affiliated with them. Despite multiple assertions by McKinsey’s leadership to the contrary, legal filings make clear that the company did work on behalf of the Chinese government, and therefore, the CCP.

In a bankruptcy court filing dated September 18, 2020, McKinsey Recovery & Transformation Services U.S., LLC—a wholly owned subsidiary of McKinsey & Company Inc.—disclosed the Chinese government as a client. Specifically, in Schedule 2 of the court filing, McKinsey disclosed that it has “client connections” to “China. [sic] Chinese Government,” as well as “CN Government—Fed/Prov [sic].” The bankruptcy court filing also describes numerous other questionable “client connections” that McKinsey failed to acknowledge in the past, including state-owned enterprises (SOEs) and other firms with close links to the CCP such as China Construction Bank, China Resources Holdings Company Limited, China Petroleum & Chemical Corporation, and many others. In accordance with Beijing’s own laws—including its policies promoting “Military-Civil Fusion”—General Secretary of the CCP Xi Jinping has repeatedly emphasized the need for the Chinese government to break down all barriers between the military and civilian sectors of the economy. McKinsey’s work on behalf of Chinese SOEs, and other firms, is tantamount to work on behalf of the CCP and could lead to direct or indirect support for the CCP’s armed wing, the People’s Liberation Army.

When combined with McKinsey’s apparent willingness to leverage confidential information, these previously undisclosed relationships between McKinsey & Company and the CCP, the Chinese government, and CCP-related entities, raise serious questions as to whether McKinsey can be trusted to continue working on behalf of the United States government, including our Intelligence Community.

As you are aware, both the Trump and Biden Administrations have determined that the CCP’s system of mass surveillance and internment, denial of the Uyghurs’ right to peacefully practice their religion, and use of forced labor, sexual violence, forced abortion, and forced sterilization of women in the Xinjiang Uyghur Autonomous Region constitute genocide and crimes against humanity. In light of these atrocities, McKinsey’s apparent work on behalf of the CCP raises ethical concerns which we would like you to address on an ongoing basis, in anticipation of oversight likely to be conducted in the next Congress.

We therefore request any and all information related to McKinsey’s work in the PRC and on behalf of the CCP, the Chinese government, and CCP-related entities. We further urge you to explain, in detail, how your internal firewalls have prevented, and will prevent in the future, the transfer of confidential information, including from the United States government and American companies to those in the PRC.

Thank you for your prompt attention to this issue.