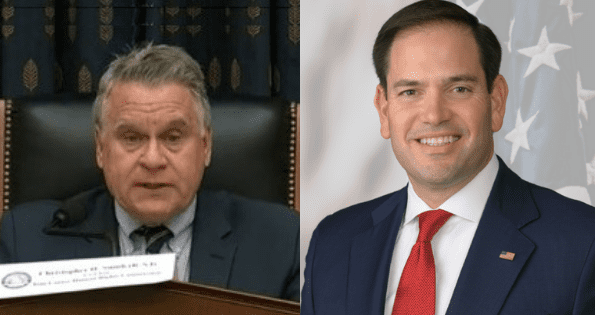 U.S. Sen. Marco Rubio, R-Fla., and U.S. Rep. Chris Smith, R-NJ, the top Republicans on the Congressional-Executive Commission on China (CECC), sent a letter to the International Olympic Committee (IOC) reiterating their appeal to postpone the XXIV Olympic Winter Games, which are currently scheduled to be held in Beijing in February of 2022.

The letter also urges the IOC to prohibit the People’s Republic of China (PRC) national team from participating and rejects the IOC’s previous decision to “remain neutral on all global political issues,” noting that the IOC has a moral obligation to reject the PRC’s participation in the games.

Rubio is a senior member of the U.S. Senate Committee on Foreign Relations. Rubio and Smith are ranking members of the CECC.

We are in receipt of Director General De Kepper’s July 26, 2021 response to our letter sent on July 23. We again underscore our urgent appeal for the International Olympic Committee (IOC) to postpone the XXIV Olympic Winter Games scheduled to be held in Beijing, People’s Republic of China (PRC), in February 2022 and instead relocate the games to another country if the host government does not change its behavior. No Olympics should be held in a country whose government is committing genocide. Two successive U.S. administrations have found that the actions taken by the PRC against Uyghurs, and other predominantly Muslim ethnic groups, in the Xinjiang Uyghur Autonomous Region (XUAR) constitute genocide. Canada, the United Kingdom, the Netherlands, Lithuania, the Czech Republic, and Belgium have reached the same determination. The German parliament is also conducting an inquiry into the matter. An independent report issued by more than 30 international law experts in March 2021 concluded there is “clear and convincing” evidence that the PRC has violated every provision of the United Nations Genocide Convention.

Director General De Kepper’s claim that the IOC taking a similar stand would somehow compromise its commitment to “remain neutral on all global political issues” rings hollow. Taking a stand against genocide is a moral decision, not a political one, and no exemption exists for the IOC when it comes to responsibility for moral decisions. Moral neutrality is a contradiction in terms. What is being asked of you is to refuse to dignify the PRC authorities with the honor of hosting the Olympics Games in their capital when those same authorities are actively carrying out a genocide.

Your July 23, 2021 letter suggests that the IOC is prepared to look past the arbitrary, extrajudicial detention of Turkic Muslims on a massive scale, in which torture, sexual assault, forced abortion, forced sterilization, and forced labor are taking place, as a price worth paying for the intangible symbolism of the Olympics – “they [the games] are the most powerful symbol of unity, in all our diversity, that our communities know.” “Unity” with the perpetrators of genocide is not a virtue. It is complicity. The IOC wants the international community to sacrifice its moral credibility in exchange for the mere appearance of unity. Your letter further asserted that “[a]t all times, the IOC recognizes and upholds human rights, as enshrined in both the Fundamental Principles of the Olympic Charter and in its Code of Ethics.” The IOC cannot credibly claim to “uphold human rights” at the same time that the IOC precludes human rights as a consideration for determining the host city. Such a position suffers from both moral and logical inconsistency.

Moreover, if the IOC is serious about fidelity to the Olympic Charter, the IOC must then prohibit the PRC team from participating in the games on account of the flagrant violations of the Olympic Charter committed by the PRC authorities. The fundamental principles of Olympism include a commitment to “promoting a peaceful society concerned with the preservation of human dignity.” The reference to “human dignity” echoes the language of the Universal Declaration of Human Rights (UDHR) and the International Covenant on Civil and Political Rights (ICCPR). Can the IOC say with a clear conscience that Beijing has shown due concern for “human dignity” as defined in the UDHR and the ICCPR?  This certainly cannot be said with regards to Beijing’s treatment of the Uyghurs, Tibetans, Hong Kongers, Chinese Christians, Falun Gong practitioners, defense lawyers, citizen journalists, civil society activists, or democracy advocates. Even Chinese Communist Party (CCP) officials are routinely denied basic rights when they are suspected of violating CCP rules. The truth is no one in the PRC enjoys the rights and freedoms enshrined in the UNDHR and ICCPR, which are inseparable from any meaningful conception of “human dignity.” The IOC must reckon with this reality.

Another fundamental principle of Olympism is that “The practice of sport is a human right. Every individual must have the possibility of practicing sport, without discrimination of any kind…” Many young Uyghur men and women who might ordinarily compete in sports are being held in reeducation camps and subjected to forced labor. Young women have suffered sexual assault as a result. The IOC’s failure to recognize these forms of ethnic and religious discrimination only make it all the more impossible for these groups to enjoy any semblance of a normal life, such as participating in competitive sports. Why would the IOC choose a host that systematically excludes entire groups of people from participating in the games?

The PRC’s campaign against Uyghurs and other predominantly Muslim ethnic groups in the XUAR not only constitutes genocide, it also clearly violates Article 1.4 of the IOC Code of Ethics. If the IOC stands by its vow that “rejection of discrimination of any kind on whatever grounds, be it race, color, sex, sexual orientation, language, religion, political or other opinion, national or social origin, property, birth or other status” is a requirement to host and participate in the Olympic Games, then it must disqualify the PRC. PRC authorities discriminate against prospective athletes, particularly Tibetans and Uyghurs, on racial and religious grounds. The CCP actively deprives Tibetans, Uyghurs, Mongolians, and Koreans who reside in areas under PRC control of the right to be educated in their mother languages. In fact, PRC authorities have imprisoned those who have advocated on behalf of indigenous language rights.

The CCP does not permit religious believers to speak of their faith outside of state-regulated religious venues. CCP officials would block any Chinese athlete who sought to share his or her faith with others from competing at the games. As for political expression, we need not catalogue the long list of political opinions that Chinese athletes cannot hold if they hope to compete in the Olympics. Consider the plethora of topics censored on the Chinese internet and state-run media, a list that is updated daily, for a sample of the severe constraints that Chinese athletes face when it comes to political expression. It is clear that Beijing would not allow an athlete from Hong Kong, for example, who played a prominent role in the pro-democracy protests, to participate in the games.

Article 2 of the IOC Code of Ethics states that Olympic parties “must not act in a manner likely to tarnish the reputation of the Olympic Movement.” A campaign of genocide not only tarnishes the reputation of the Olympic Movement, it threatens to damage it beyond repair. More could be said about how Beijing has betrayed the spirit of the Olympic Charter and IOC Code of Ethics, but the point need not be belabored. The IOC knows what needs to be done because the IOC has done it before. The IOC banned the Russian team for four years in 2019 because of doping. The IOC banned the Indian team in 2012 because of corruption issues. The IOC banned the Afghan team in 2000 in part because of the Taliban’s discrimination against women and girls. If those types of misconduct are grounds for banning a team from the Olympics, surely genocide more than warrants the same response.