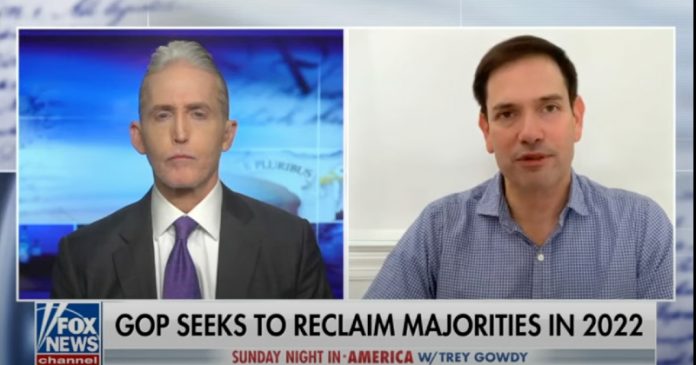 Gearing up for his bid for a third term in the U.S. Senate, this week, U.S. Sen. Marco Rubio, R-Fla., took aim at President Joe Biden and the Democrats as he took to the national airwaves.

Rubio appeared on “Sunday Night in America with Trey Gowdy” on Fox News to weigh in on a host of issues.

Asked about the challenges the nation currently faces, Rubio offered his take on them.

“The number one priority of the federal government always has to be the security of our country. I’m concerned about that in the short term. There are still terrorists in the world that want to kill Americans. There are still Iranian elements around the world that want to do us and our allies harm. We’ve watched the carnage that [Vladimir] Putin has…inflicted on the people of Ukraine. And certainly the Chinese in the long term have a plan to displace America. That always concerns me above everything else,” Rubio said.

“These short-term, mid-term challenges that we have are problematic, not just because they’re bad problems, but because the people at the White House are both incompetent and seem disinterested or unfocused on any of them. The things they’re focused on are not the things that are threatening the country right now,” he added.

“Thankfully, most Americans are not politicians. So the way they view this issue is through common sense. Common sense…says, ‘Yes, we have an immigration system. We’re very generous. A million people a year come to this country after waiting maybe a decade on a green card. But we have to have rules or a process by which we decide who comes in, when they come in, [and] how they come in.’ That involves telling some people they can’t come in, at least not yet. That’s why you have a border and…border security,” he said. “The Left and [the] White House…seem to be out there promoting things that are encouraging people to come here illegally. We have a bad problem at the border now. Trade is going to get a lot worse…. Our government knows for a fact there are hundreds of thousands of people poised to try to enter the country this summer illegally across the border because, and rightfully so, they believe that if they can get across the border [and] say the magic words for [an] asylum request, they’re going to get to stay,…have a work permit, and get benefits. They’re coming, [and] we’re going to have a big, massive surge of illegal immigration again. It’s already 6,000 a day, as we stand here.”

Rubio also opined on the economy, including inflation.

“[President Biden and his administration] have to admit we have a problem. For a year, they denied it. They said inflation wasn’t going to be real. They pumped 1.9 trillion dollars of borrowed government money into the economy. It exacerbated inflation,” Rubio said. “We’re going to have a supply chain crisis coming up again. We already have one. We’re going to have a very serious one coming up, because…we depend too much on China…. Shanghai’s been shut down now for about six weeks. So that’s going to lead to that problem. That’s going to add to inflation.

“[The Biden administration has] been hostile to oil and natural gas, which we have plentiful supplies [of] here in the United States. The price of that will continue to climb,” he continued. “Even as people are finding jobs and even getting raises, inflation is eating that up even faster. The inflation is not eight-and-a-half percent. Inflation is 30 percent for food and 40-something percent for other things. It’s for the things people need on a daily basis. Inflation is way higher than eight-and-a-half percent, and real people know it. You go to the grocery store and buy 100 dollars’ worth of groceries. It doesn’t feel like 100 dollars’ worth of groceries, and people notice that every single time they go.”

Rubio also urged Americans to give the GOP control of both chambers of Capitol Hill and offered his take on what a Republican majority would do in Congress.

“One [thing we will be able to do] is keep bad things from happening. You can put away all these crazy ideas of the Far Left, these woke ideas, [and this] nuttiness. You can put that stuff away. [We will also be able to] pass common-sense bills, laws, legislation, and measures, and dare the president to veto them. We’ll see if he does. I think that puts a tremendous amount of pressure on [the Democrats],” Rubio said. “What are some of the things we can begin to do? Diversify our supply chains, do things that will encourage more to be made in America if possible, or closer to America, so we don’t depend as much on China. Get rid of these rules — through legislation, and maybe even through this procedure that we now have to overturn executive orders and rulemaking — that have made it so difficult for American oil and natural gas to expand, and allow some of that domestic supply to begin to grow…. Also, the markets will know that they don’t have to worry about new trillion-dollar spending programs that are going to make inflation worse.

“We can do some good things. We can stop every bad thing from happening. And we can begin to pressure this White House to sign some common-sense legislation on the things that people care about on a daily basis, not checking the box of every woke, liberal, leftist, Marxist priority that [the Democrats’] radical base insists upon,” he added.

In the meantime, the Democrats are increasingly hitting Rubio on abortion after a draft of a U.S. Supreme Court decision overturning Roe v. Wade was leaked.

“Marco Rubio said Roe v Wade ‘is not settled law’ and that ‘until we can get a Supreme Court to overturn Roe vs. Wade, we do everything possible…to confront it.’ Rubio has also stated that he ‘never’ supported rape and incest exceptions in abortion bans,” insisted the Democratic Senate Campaign Committee (DSCC).

U.S. Rep. Val Demings, D-Fla., is the heavy favorite for the Democratic nomination to challenge Rubio and she is also weighing in on abortion.

“I’m sick and tired of Marco Rubio telling women what to do with our bodies,” she noted last week.

Over the weekend, she highlighted her 27 years of experience in law enforcement, rising to serve as Orlando’s police chief.

“As the chief of police, I always stood up for justice and the freedom of choice. As Florida’s senator, I promise to speak out and fight to codify Roe v. Wade into law,” Demings insisted.