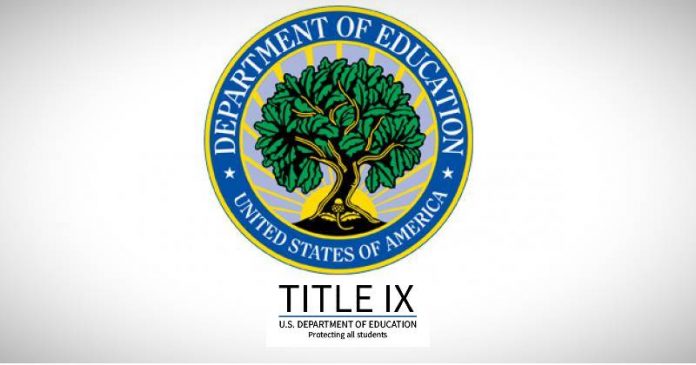 Four other Senate Republicans also signed the letter, which is below.

We write regarding the Department of Education’s intention to unlawfully include “gender identity” as a protected category under Title IX of the Education Amendments of 1972 (20 U.S.C. § 1681). The Biden administration claims that Title IX, which was written to provide equal opportunities to women, protects men claiming to be women on the basis of their “gender identity.” Consequently, your department has suggested that schools which prohibit males from using women’s bathrooms or playing women’s sports could be guilty of unlawful “discrimination.” Your interpretation of Title IX will undermine that law’s very purpose by making schools and sports unsafe and unfair for women and girls.

Equally disturbing is the likelihood that your department will weaponize Title IX to force a radical gender ideology in K-12 classrooms. A number of troubling incidents suggest how your interpretation of Title IX could erode women’s rights, free-speech rights, parental rights, and children’s safety and innocence. Given these concerns, please respond to the following questions by Monday, August 15, 2022.

1. A middle school in Wisconsin recently filed a complaint under Title IX against three students for choosing not to refer to another student by her preferred pronouns. Would it be a potential violation of Title IX for a student to refuse to call someone by pronouns that do not correspond to their biological sex?

2. A school in Virginia suspended a teacher, Tanner Cross, for refusing to use a child’s “preferred” pronouns and cited Title IX as one justification. Would it be “discriminatory” or a potential violation of Title IX for a school employee to refuse to refer to a student or colleague by their preferred name or pronouns? If yes, would teachers with religious or conscientious objections be given an exemption?

4. Would it be a potential violation of Title IX for any school, district, or state to refuse to provide puberty blockers or cross-sex hormones to “affirm” a students’ “gender identity” at a school health clinic?

5. In order to comply with the Obama administration’s “Dear Colleague letter” on Title IX, a Chicago public school chose to treat a girl as a boy and override the parents’ expressed wish to treat their daughter according to her biological sex. Would it be “discriminatory” or a potential violation of Title IX to treat a child according to their biological sex if the parents requested this, but the child preferred a different “gender identity”?

7. The Family Educational Rights and Privacy Act guarantees parents’ “right to inspect and review the education records their children.” Under your proposed rule, would a school be allowed to deny parents access to a child’s educational records, including sensitive information about their purported “gender identity,” for any reason? Under what circumstances could a school deny parents their right to inspect and review their children’s records?

9. A male student at the University of Pennsylvania who claims to be a woman, Lia Thomas, has caused discomfort through his presence and behavior in the women’s locker room. Would it be discriminatory or a violation of Title IX to deny a boy who claimed a “gender identity” that did not correspond with his biological sex to use a girl’s locker room?

10. You have claimed that your proposed rule will not address women’s sports, yet your agency appears to be enforcing Title IX to effectively end women’s sports teams. Last June, your department signed onto a statement of interest, led by the Department of Justice, arguing that West Virginia’s law to prevent biological males from participating in female athletics is a violation of Title IX. Would it be a violation of Title IX to deny a biological male who claimed a “gender identity” that did not correspond with his biological sex to join a women’s sports team?

Thank you for your attention to this important manner.