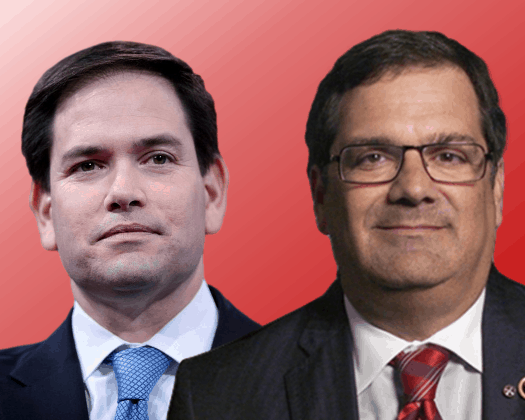 U.S. Sen. Marco Rubio, R-Fla., and U.S. Rep. Gus Bilirakis, R-Fla., joined a letter to President Joe Biden on the pressing need for a nominee to the position of Ambassador-at-Large for International Religious Freedom.

The members emphasized the importance of America remaining a world leader in defending and promoting religious liberty for all people of any faith, especially in countries where people are violently targeted for their faith such as Burma and China.

Religious freedom, one of the most basic human rights for all people, has historically been an area of sincere bipartisan support and agreement in American foreign policy. The federal government has made significant strides in promoting the rights of individuals worldwide to have a faith, live their faith, change their faith, or have no faith at all in addition to condemning the persecution of religious minorities. However, the current state of international religious freedom is one of deepening crisis with government restrictions on religion rising to a record high according to Pew Research Center’s 11th annual study of restrictions on religion.

Further, situations such as attacks on the Rohingya in Burma, mass imprisonment and exploitation of Uyghurs and other faith groups by the Chinese government, and the ISIS genocide against Yazidis and Christians in Syria and Iraq only underscore the importance of expanding and strengthening US international religious freedom engagement.

For the safety, security and prosperity of religious and non-religious communities around the world, it is imperative that the United States remain a world leader in the protection of this fundamental right.

As such, we would encourage you to nominate an Ambassador-at-Large for International Religious Freedom at your earliest opportunity. An experienced, well-qualified Ambassador-at-Large leading the International Religious Freedom office within the State Department is vital for the success of the office’s efforts to monitor religiously motivated abuses and discrimination, develop and implement policies to address global religious freedom concerns, engage with non-governmental organizations working to promote religious freedom, and fully engage and support the strategic global gathering of governments, faith communities, and civil society.

In addition to personnel, we recommend your administration engage on a variety of initiatives and actions to collaborate with global partners on priorities within the international religious freedom space. This includes leading efforts among government officials and civil society groups in partner countries to organize and grow strong and diverse coalitions that aim to protect and advance religious freedom.

As Congress noted in the Joint Explanatory Statement that accompanied the Consolidated Appropriations Act of 2021, monitoring efforts and opportunities to expand international religious freedom programs, including through International Religious Freedom roundtables, bring together individuals from diverse religions and beliefs to discuss the importance of religious freedom, advance policy recommendations, and advocate for those who are most at risk of losing their religious freedom. We urge your administration to engage with the IRF Roundtable here in Washington, DC and other strategic assemblies around the world seeking to advance international religious liberty.

Congress has continued to engage on international religious freedom issues and speak into areas that should be prioritized. For example, during the 116th Congress, both chambers of Congress passed resolutions to call for the repeal of global blasphemy, heresy and apostasy laws. Congress also directed the International Religious Freedom office to support in-country training programs for countries that repeal or begin a formal process to remove blasphemy laws.

Members of Congress have also been outspoken about the ongoing genocide and crimes against humanity against Uyghur Muslims and other members of ethnic and religious groups in Xinjiang. Due to the urgency of this issue in particular, it is crucial that international religious liberty remain a top priority of United States foreign policy. China’s hostility toward religion and people of faith extends to Tibetan Buddhists, Falun Gong practitioners and Christians, some of whom are unjustly imprisoned for their faith, such as Pastor John Cao.

Beyond instances of genocide and violent oppression, the United States has also continued to hold our allies to account when violations of religious freedom occur. Congressional and Administrative engagement was integral to the release of Pastor Andrew Brunson, who was wrongfully imprisoned in Turkey for more than two years. Even now, the United States has continued to defend Coptic Christians in Egypt, denounce anti-conversion laws in India and draw attention to the alarming rise in anti-Semitism in Europe.

The freedom of religion is a fundamental right that Americans enjoy every day, but sadly is not respected by all governments or non-state actors around the world. The United States is a beacon of hope and freedom, and we must continue to be a leader in calling attention and responding to religious persecution wherever it occurs. We look forward to continuing this dialogue and hope that your administration will work on a bipartisan basis with Congress to advance these policy items and prioritize the right of all people to have a faith, live their faith, change their faith or have no faith at all.